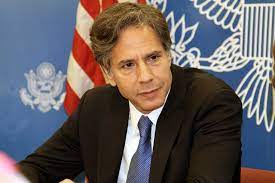 U.S. Secretary of State Tony Blinken (File photo courtesy Wikimedia Commons)
"Over two-thirds of the US Senate, including lawmakers from both sides of the aisle, have signed a letter to Secretary of State Antony Blinken calling for the Biden administration to quash a UN Human Rights Council inquiry into Israelâs treatment of Palestinians.

'This one-sided approach is consistent with UNHRCâs continuing bias against Israel and the disproportionate use of resources in an ongoing campaign to disparage, discredit and denounce Israel,' reads the open letter sent to Blinken on Monday, signed by 68 lawmakers.

The initiative, which was led by Democrat Senator Ben Cardin of Maryland and Republican Senator Rob Portman of Ohio, was backed by 31 Democrats and 37 Republicans.

The Biden administration rejoined the UNHCR earlier this year, after former president Donald Trump withdrew the US from the council over its alleged anti-Israel bias. Seeking to justify the reversal, the current White House has argued it was unable to influence the international dialogue on human rights without a seat at the table.

Biden administration officials have insisted they will use the renewed US membership to oppose one-sided measures targeting Israel and speak out against the 125-8-34 vote to launch the open-ended probe into Israel following last Mayâs war against the Hamas terror group.

Besides the Israel-Hamas conflict, the commission is also to investigate 'all underlying root causes of recurrent tensions, instability, and protraction of conflict' including discrimination and repression, according to the text.

The only way to quash the probe after the UNHCR voted to establish a Commission of Inquiry and the UN General assembly voted to approve an annual budget of over $4 million would be for the council to adopt a resolution reversing the previous one â a rather unlikely possibility given the overwhelming support for the initiative.

Mondayâs letter followed a similar bipartisan letter penned in the House of Representatives, which was signed by only 42 lawmakers of 435 representatives in total.

The Senate letter was hailed by AIPAC, the pro-Israel lobby group, which called the probe 'part of the UNâs broad, decades-long campaign to criminalize and delegitimize the worldâs only Jewish state.'

The commission of inquiry was denounced by Israeli leaders when it was announced in May, shortly after the conclusion of an 11-day war between Israel and Hamas-led fighters in Gaza.

Gazan terror groups shot thousands of rockets at Israel during the war, called by Israel 'Operation Guardian of the Walls,' killing 12, all but one of them civilians.

Israeli retaliatory airstrikes on targets in the Strip killed some 250 people, including 66 minors, according to the Hamas-run Health Ministry, which does not differentiate between terror group members and civilians.

Israel has said the majority of those killed were terror operatives and insists it did everything to avoid civilian casualties while fighting armed groups deeply and deliberately embedded in populated areas.