Abbas once again set to demonize Israel as he pushes Palestinian propaganda at the U.N. 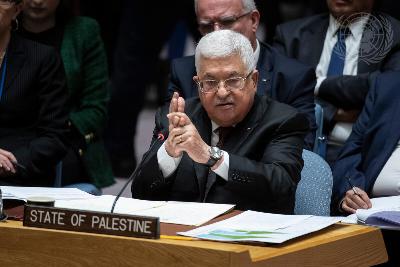 Mahmoud Abbas (File photo courtesy U.N. Photos)
"The 77th session of the UN General Assembly opens this week. It is expected that the Palestinian Authorityâs President Mahmoud Abbas will once again force the Palestinian question to the forefront of the international agenda.

There has been a decline in interest in the Palestinian issue in recent years, perhaps due to the success of the Abraham Accords. The accords changed the decades-old paradigm where it was considered impossible for Israel to make peace with any additional Arab countries before the Palestinian issue was resolved. Instead, the Abraham Accords showed that notwithstanding the ongoing conflict, a strong and welcome peace between Israel and its Arab neighbors is possible.

After a failed attempt 11 years ago, it seems that Abbas feels the time is ripe to revive the bid to become a full member state of the UN.

On such occasions, Abbasâs track record of support for terror is either ignored or forgotten. The man who is due to speak at the United Nations in front of the world has supported terror attacks on innocent Israeli civilians.

Even more abhorrent is that at a press conference in Germany last month, Abbas refused to denounce the 1972 Munich massacre where 11 Israeli athletes and coaches were murdered. Disgracefully, he accepted no responsibility for the attack and instead diverted the discourse to the '50 holocausts' that Israel is supposed to have committedâa false, slanderous and disgraceful assertion. The German chancellor condemned Abbasâs comments unequivocally and said he was 'disgusted by the outrageous remarks.'...

To succeed in his bid for statehood, Abbas needs to be able to generate the support of a majority of the members of the General Assembly, followed by the backing of nine out of 15 members of the Security Council. Even if he gets this far it is near certain that the US will veto the proposal.

In the very likely scenario that Abbas does fail, he will, unfortunately, still have succeeded in other respects. He will have triumphed in the promotion of a fraudulent cause, in once more bringing Israelâs reputation into disrepute...

Likewise, in 2012, after Abbasâs initial failed attempt at statehood, he was granted such a sweetener by the UN itself, and the PA became a non-member observer state. Although symbolic in nature, this act has in fact had damaging consequences for Israel as the PA consistently seeks to tarnish Israelâs name in diplomatic and public forums, despite its pledge in 2012 not to do so...

There cannot be any sort of resolution or diplomatic solution with an organization that seeks the destruction of a sovereign nation, which pays terrorists to commit murder and which is headed by a dictator who glorifies and celebrates acts of terror and encourages people to do the same.

No sane state would approve of such a partnership. It is time for the international community to end its appeasement of the PA regime and its support of terror. Appeasement will never bring about a solution. It will only create an ongoing spiral of problems as we continue to give the PA, through Abbas, the power to pursue its barbarous path. It is to the peril of the international community that it turns a blind eye to this evil."
Date
September 15, 2022
Title
Abbas once again set to demonize Israel as he pushes Palestinian propaganda at the U.N., JNS.org
Author(s)
Danny Danon
Original Source
https://www.jns.org/opinion/abbas-once-again-set-to-demonize-israel-as-he-pushes-palestinian-propaganda-at-the-un
Attachment
Click here to view this article in MS Word/PDF format