Ahead of U.N. vote on probe, Israel says measure shows âcontemptâ for its security 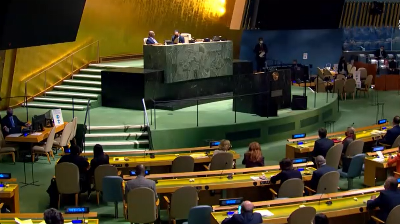 Support for the resolution shows 'contempt for and dismissal of Israeli security concerns,' the official added in a briefing with Israeli journalists.

The resolution, titled 'Israeli practices and settlement activities affecting the rights of the Palestinian people and other Arabs of the occupied territories,' requests that the Hague-based ICJ 'render urgently an advisory opinion' on Israelâs 'prolonged occupation, settlement and annexation of Palestinian territory.'

The UNGA vote is not yet scheduled, but will occur before the end of the year, within days.

The resolution passed the UN General Assembly Fourth Committee in November, with 98 supporting, 17 opposing, and 52 abstaining.

Israel 'sees a chance to raise the number of countries opposed,' said the official, 'but many factors influence that.'

'We know that there is an automatic majority.'

Israel is trying to get more 'like-minded' democratic countries to oppose the measure or at least abstain. Of the 27 European countries in the Fourth Committee, 21 did not support the measure.

'I think a lot of countries didnât see it as a constructive step,' the official continued. 'Even if they donât agree with our policies, they oppose this step.'

Israel has reached out to around 100 countries, including 60 that received letters from Prime Minister Yair Lapid. President Isaac Herzog has also called world leaders on the issue.

In his letter, Lapid called the Palestinian campaign, 'a concerted effort to single out Israel, to discredit our legitimate security concerns, and to delegitimize our very existence.'...â
Date
December 22, 2022
Title
Ahead of U.N. vote on probe, Israel says measure shows âcontemptâ for its security, The Times of Israel
Author(s)
Lazar Berman
Original Source
https://www.timesofisrael.com/ahead-of-un-vote-on-probe-israel-says-measure-shows-contempt-for-its-security/
Attachment
Click here to view this article in MS Word/PDF format