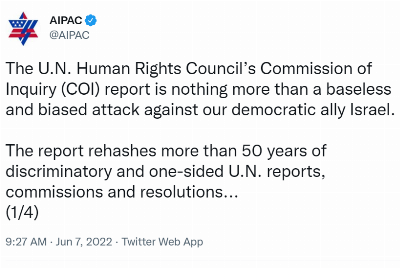 "The U.N. Human Rights Councilâs Commission of Inquiry (COI) report is nothing more than a baseless and biased attack against our democratic ally Israel. The report rehashes more than 50 years of discriminatory and one-sided U.N. reports, commissions and resolutions that inaccurately blame the Israeli-Palestinian conflict on the Jewish state â laying the groundwork for future boycotts against Israel and justifying terrorism against Israeli citizens.