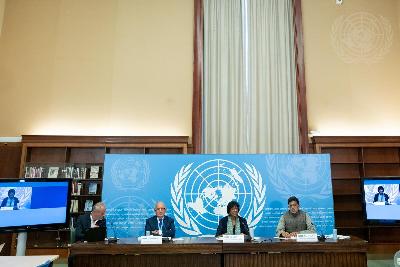 The U.N. Commission of Inquiry (Photo courtesy the U.N.)
"That a U.N. official would go on the record with anti-Semitic comments ought to be enough to engender outrage and involve consequences for the person involved. But sometimes, a controversy over something terrible that someone said can actually be a distraction from the real problem.

In a podcast interview on the anti-Zionist publication Mondoweiss, Miloon Kothari, an Indian citizen and U.N. Human Rights Council investigator, said the âJewish Lobbyâ controlled social media, a classic and vile trope of Jew-hatred. Among other appalling things, he also said that Israel, which he mislabeled as an âapartheid state,â ought not even to be allowed to be a member of the United Nations.

But no one should care if Kothari apologizes in some manner for what he said. Nor does it matter if the UNHRC and its Commission of Inquiry run by Navi Pillay, for whom Kothari works, were to condemn what he said punish him in any way or even fire him, though that is highly unlikely. The problem with this incident is not that he said something very bad. Itâs that the U.N. agency that employs him and the specific project which he is working on is itself the embodiment of prejudice against Israel and Jews.

Thatâs why condemnations of Kothari, though entirely appropriate, are actually beside the point. The UNHRC singles out Israel for disproportionate and libelous condemnation as a matter of course. The Commission of Inquiry it set up last year continues with its open-ended and one-sided kangaroo court investigation of the Jewish stateâs actions in the conflict with Palestinian terror organizations that are pledged to its destruction. So long as that is true, the only thing that is noteworthy about an interview like the one Kothari gave is that he is saying the quiet part out loud.

Seen in that light, putting the focus on Kothari and whether or not the United Nations or the UNHRC does anything about him can only serve to divert attention from the far more outrageous conduct of the world body and its agency, which seek to mainstream anti-Semitic libels and ultimately isolate and destroy the one Jewish state on the planet. Still, we can learn some things from this incident that point to the larger problem.

It speaks volumes that the reaction from the UNHRC and the Commission of Inquiry has been to disingenuously proclaim its opposition to anti-Semitism and for Pillay to falsely claim that the offending comments were taken out of context.

Indeed, far from being maliciously cherry-picked from an otherwise anodyne exchange, the offending quotes actually capture the spirit of the entire interview. His resentment against Israelis and Jews who have the temerity to take note of the UNHCRâs prejudiced conduct is palpable. Kothari believesâand clearly speaks for the rest of the agencyâwhen he says that the pushback against the commissionâs work, which has been aptly compared to an anti-Semitic pogrom, is somehow illegitimate.

Moreover, the entirety of his comments also demonstrates that he ought to be disqualified from serving as an âinvestigatorâ into any complaints against Israel. He considers its existence a violation of Palestinian human rights, thus validating the nakba (âcatastropheâ of Israelâs modern-day creation) narrative in which Jewish rights are erased and its recognition under international law a terrible mistake.

His description of his work also lays bare that he views every method of self-defense on the part of the Jewish state against those determined to wipe it off the map as being equally a violation of human rights.

Nor is it any surprise that this would be the case since the entire point of the otherwise marginal outlet to which he spoke is to attack Israel and legitimize anti-Semitism.

Pillay herself has been spreading the âapartheidâ smear long before she was tapped to head this commission. She has also, as Anne Bayefsky of Human Rights Voices writes, been complaining about how unfair that she and her anti-Semitic staff are being accused of anti-Semitism.

But what is interesting about these comments is how much it reveals about the culture of the UNHRC. That someone tasked with digging into the details about a complicated struggle would have no compunction about speaking openly of his bias against Israel is telling.

Of course, that the UNHRC and its Commission of Inquiry are prejudiced against Israel has never been a secret. The whole point of the exercise is to create a body that will synthesize decadesâ worth of lies about Israel into a process that will masquerade as a legal investigation.

This demonstrates that what passes for discourse about human rights in the international community is a tragic farce. But it also reminds us of the corruption at the core of the governing culture of the United Nations, as well as the way it is willing to throw away even its own rules in order to attack Israel and the Jews. By treating anti-Israel terrorism as part of a justified cause, the world body is essentially turning it into an outlaw state and its citizens into targets against whom acts of assault or even mass murder are not really crimes.

Israeli Prime Minister Yair Lapid is using Kothariâs remarks to demand that U.N. Secretary-General AntÃ³nio Guterres disband the Commission of Inquiry. But if Guterres or the UNHRC produces some sort of weasel-worded apology or makes a meaningless pledge about ensuring fairness in the future, that will merely allow the inquisition that Pillay and Kothari are conducting to continue without even the pretense of it being stopped from continuing with one-sided accusations against Israel.

From that point of viewâand regardless of how abhorrent his comments wereâno energy should be expended on the part of Jewish or pro-Israel groups to âcancelâ Kothari. What needs to be canceled is the Commission of Inquiry.

That goal will be firmly resisted by the commissionâs supporters among undemocratic nations, as well as open anti-Zionists with a long record of Jew-hating like Pillay and Kothari. It is the UNHRC that needs to be canceled and, more importantly, starved of funds donated by the United States and its Western allies.

The real scandal about the Commission of Inquiry is that it is being funded in large part by the United States, which, due to a catastrophic decision on the part of President Joe Biden rejoined the agency after the Trump administrationâs withdrawal.

Needed immediately are not statements of concern but congressional legislation that will condition U.S. funding for the entire United Nations, which heavily relies on the largesse of American taxpayers to continue their operations both in New York and Geneva, on disbanding the Commission of Inquiry. Moreover, unlike so many other congressional forays into foreign policy, this one cannot include escape clauses that will allow the president to avoid enforcement of the law.

That is something that is unlikely to happen so long as Biden can rely on the backing of Democratic majorities in both the House and the Senate. But it is something that Republicans should put on their âTo Doâ list if they win back control of Congress in November.

Some Americans and even supporters of Israel are so numb to non-stop U.N. outrages that they find it hard to muster much interest in any of this. But the danger of the world bodyâs legal delegitimization of Israel, which is the Commission of Inquiryâs sole purpose and goal, should not be underestimated or ignored.