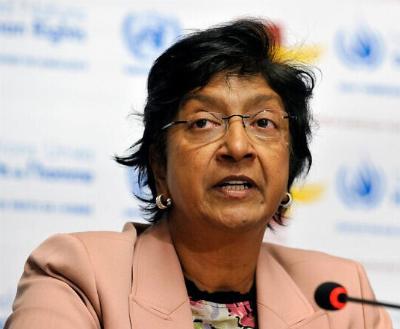 Navi Pillay (U.N. Photo)
"A Berlin event scheduled to honor the head of an ongoing UN probe investigating alleged Israeli crimes against Palestinians was called off this week after the cityâs mayor pulled support for the city hall ceremony.

Mayor Franziska Giffey said the event planned for Tuesday by the non-governmental United Nations Association of Germany to fete Navi Pillay at the Rotes Rathaus, or Red Town Hall, was not representative of the views of Berlinâs denizens.

âHolding a presentation of this kind at the Red Town Hall, which is the town hall of all Berliners, is based on the assumption that the presentation meets with the broad approval of Berlinâs population,â a spokesperson for Giffey told The Times of Israel on Monday. âThat is not the case for this event.â

Pillay is head of the three-person UN Independent International Commission of Inquiry on the Occupied Palestinian Territory, including East Jerusalem, and Israel. Critics say both Pillay and the inquest are biased against Israel, and the decision was hailed by Israelâs ambassador to Germany, who had pushed for the mayor to nix the award.

With the mayor and Berlinâs lawmakers avoiding the event, the prize ceremony was canceled altogether by the NGO, which did not respond to requests for comment.

According to the UN Association of Germanyâs website, the organization âstrives to inform the German public in an impartial and critical manner about the objectives, institutions and activities of the United Nations.â

Giffeyâs volte-face came about as the result of a conversation she had with Israelâs ambassador to Berlin Ron Prosor last week, the diplomat told The Times of Israel.

Prosor relayed Israelâs concerns over Pillay and the UN probe on the sidelines of an unrelated event in Berlin on September 14.

âWe made sure that she knew who Pillay is and I have to give it to her that she understood it very very quickly and decided that sheâs not going to give the prize and no one in the parliament of Berlin is going to do that,â said Prosor.

Pillay, a South African jurist, was the United Nationâs High Commissioner for Human Rights from 2008 to 2014, during which she frequently criticized Israelâs actions in Gaza.

Israel has previously said it will not cooperate with the commission, saying its members âhave repeatedly taken public and hostile positions against Israel on the very subject matter that they are called upon to âindependently and impartiallyâ investigate.â

Prosor described Pillay as âsomeone who really demonizes and delegitimizes the state of Israel day in and day out.â

Then in a May 2021 lecture, she described Israelâs treatment of the Palestinians as âinhumanâ and compared Israel to apartheid South Africa.

Earlier this year, she backed a member of the commission, Miloon Kothari, when he questioned whether Israel should be a member of the UN, and said social media was âcontrolled largely by the Jewish lobby.â âTo have Navi Pillay investigate Israel is like asking Putin to chair a commission of inquiry into Ukraine,ââ said Prosor.

The commission is the first to have an open-ended mandate from the UN rights body, and critics say such permanent scrutiny shows anti-Israel bias in the 47-member-state council. Proponents support the commission as a way to keep tabs on injustices faced by Palestinians under decades of Israeli rule.

According to Prosor, Giffey explained that the decision to award the prize in the presence of Berlinâs mayor was made in 2019, before she came into office, and was postponed because of the COVID-19 pandemic. The Israeli envoy called Giffeyâs decision âreally amazing.â

âI donât remember many times when we go after something when the results were so effective,â Prosor said. âBoth the mayor and also the organization itself decided not to give the prize.â

According to Prosor, Palestinian Authority President Mahmoud Abbasâs accusation during an August meeting with German Chancellor Olaf Scholz in Berlin that Israel committed âholocaustsâ against Palestinians has made German officials far more attentive to Israel when it comes to bias and antisemitism in the international arena.