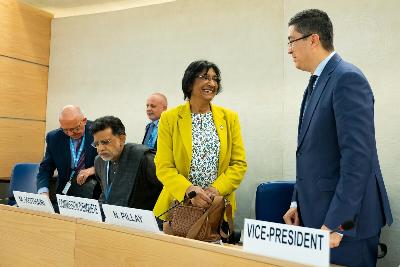 Bânai Brith Canada sees the Session as an opportunity for western nations to reclaim the moral high ground, by demanding the dissolution of the biased permanent Commission of Inquiry (COI), set up by the UNHRC to attack Israel.

In May 2021, on a close split-vote, states friendly to Palestinian terror groups, such as Hamas and Islamic Jihad, had the Council set up a permanent COI, whose mandate was written is such a way as to vilify Israel for defending itself from terror.

All three Commission of Inquiry members nominated by the UNHRC have long histories of anti-Zionism, openly signing petitions to boycott Israel and calling it an apartheid state. Commission of Inquiry member, Miloon Kothari recently provoked international headlines by making openly antisemitic remarks. Under intense pressure from UNHRC President, Federico Villegas, Kothari made a halting and insincere apology, that in no way convinced anyone.

âThe UNHRC members comprise many of the worldâs most authoritarian states, with chilling records of human rights abuses,â said Michael Mostyn, Bânai Brith Canadaâs Chief Executive Officer. âThe UNHRC reflects its members political agenda and has condemned democratic Israel 99 times since 2006, while in contrast, the Taliban in Afghanistan has never merited a rebuke. Russia â a Council member until recently when it was expelled for its invasion of Ukraine â has only a single resolution adopted against it.â

Other states like Iran and Syria, who violently repress their own people while at the same time exporting terrorism, have hardly been mentioned by the UNHRC. China has never been called out for its ongoing human rights abuses.

âWe reiterate our demand that Canada and the western nations work with United Nations Secretary General Antonio Guterres to ensure the next nominee for High Commissioner for Human Rights is committed to democracy and ready to denounce the rampant anti-Israel bias epitomized by the current UNHRC,â said Marvin Rotrand, Bânai Brith Canadaâs National Director for its League for Human Rights.

Bânai Brith calls on Canada and its allies to use todayâs UNHRC session to demand the dissolution of the COI, while working toward a new election process that would prevent states with horrific human rights records from becoming members of the UN body charged with protecting human rights."
Date
September 12, 2022
Title
Bânai Brith Canada Urges Western Nations to Demand Dissolution of Biased Commission of Inquiry, Bânai Brith Canada
Original Source
https://www.bnaibrith.ca/bnai-brith-urges-western-nations-to-demand-dissolution-of-biased-commission-of-inquiry/
Attachment
Click here to view this article in MS Word/PDF format