Controversial U.N. conference on reparations, racism slammed by Pompeo as being 'laced with antisemitism' 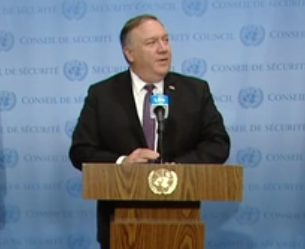 Former U.S. Secretary of State Mike Pompeo (File photo)
"As world leaders gather for this weekâs United Nations General Assembly the United States, Australia, Canada and Germany are among at least 19 countries boycotting one of the banner events over accusations of anti-Semitism and anti-Israel bias.

The event, known as Durban IV, has the theme of 'Reparations, racial justice and equality for people of African descent.'

The event will commemorate and adopt a statement 20 years after the first meeting in Durban, South Africa. While the original purpose of the event was combating racism, critics say it has been hijacked by an anti-Israel agenda that turned it into an anti-Semitic hate fest leading the U.S. and Israel to walk out of the conference. Critics want Durban to be scrapped and the U.N. to start a new anti-racist conference.

Former Secretary of State Mike Pompeo and others, including Israel's U.N. ambassador and a South African politician, spoke Sunday at a counter-conference organized by Touro College, Human Rights Voices, and CAMERA under the banner: 'Fight Racism, Not Jews: The UN and the Durban Deceit.'

'All countries that are genuinely committed to combating racism should refuse to attend Durban IV and the 20th anniversary carnival,' said Bayfesky, who is also president of Human Rights Voices. 'The Durban deceit, the double-talk, the double standards â and, in particular, the discrimination â need to be exposed and rejected, period.'

'For the secretary-general it is clear that racism and racial discrimination still permeate institutions, social structures and everyday life in every society. It must be condemned without hesitation or reservation wherever and whenever it occurs.'

'The Durban process is critical in fighting this scourge. However, whoever uses this process â or any other platform â for anti-Semitic diatribes, anti-Muslim discourse, hateful speech and baseless assertions, only denigrates our essential fight against racism,' Dujarric said.

Pompeo, a Fox News contributor, questioned the stated goal of the document and the conference that celebrates it, which he said was supposedly about fighting racism and injustice but said that couldnât be further from the truth. 'The Durban declaration is laced with anti-Semitism and the goal of those who celebrate it is not racial equality but the undermining and eventual destruction of the state of Israel.'

Pompeo noted the original Durban declaration only listed Israel as a perpetrator of racism while ignoring the likes of China, Cuba and other authoritarian regimes. 'The Durban conference in 2001 revived the Zionism is racism slur, outrageously claimed that Israel was an apartheid state, distorted the Holocaust and made numerous Nazi analogies.' Pompeo spoke of the diversity of Israel and religious rights enjoyed by all in the country. 'Israel is not an apartheid state and any conference seeking to promote such a baseless assertion must be recognized for the sham that it is.'

Pompeo said he was heartened to see that so many nations had chosen not to attend the upcoming conference but said, 'Itâs telling who is. The United States must never support baseless slander against Israel, and we must never allow our credibility to elevate the virulent anti-Semitism which permeates the Durban declaration.'

Pompeo said the U.S. should continue to deepen its commitment to racial equality and that it should not embrace the Durban declaration, but rather the Universal Declaration of Human Rights that was adopted in 1948 by the United Nations.

Pompeo noted that the Trump administration had voted against funding for the event commemorating the controversial 2001 Durban Declaration and Program of Action (DDPA). Both Democratic and Republican administrations have long opposed the Durban declaration since it was adopted in 2001, citing concerns that it is anti-Israel and anti-Semitic.

A resolution passed in the summer by the U.N. General Assembly making way for next weekâs meeting stated that itâs 'a global call for concrete action for the elimination of racism, racial discrimination, xenophobia and related intolerance and the comprehensive implementation of and follow-up to the Durban Declaration and Programme of Action.'

Kelly Craft, the then U.S ambassador to the world body told the General Assembly last year, 'Twenty years on, there remains nothing about the Durban declaration to celebrate or to endorse,' Craft said. 'It encourages restrictions on the freedom of expression. It exists to divide and discriminate and runs contrary to the laudable goal of combating racism and racial discrimination.'

Also speaking at Sundayâs counter-conference was South African member of parliament and leader of the African Christian Democratic party, the Rev. Kenneth Meshoe, who warned about using the word 'apartheid' against Israel. 'Those who accuse Israel of being an apartheid state are either honestly deceived or they are victims of propaganda and lies by those who hate Israel for whatever reason and those who are dreaming of annihilating the state of Israel, which is the only democratic state in the Middle East.'

Oscar-winning actor Jon Voight said it was 'the duty of all good people of all faiths to express outrage and demand truth be heard.' As to the U.N. conference, he said he was 'outraged at those who make excuses for this barbarism, who manufacture the propaganda of Palestinian victimhood, who refuse to recognize that this anti-Semitism is capable of destroying the Jewish nation.'

Israelâs U.N. ambassador Gilad Erdan quoted Guterres talking about the growth and dangers of anti-Semitism in 2018, and ironically noted that still, 'Yet this week, the U.N. will hold a commemoration of the 2001 World Conference against Racism, the Durban conference, where anti-Jewish racism adopted the guise of anti-racism, thereby making anti-Semitism not only morally legitimate but morally required.

Erdan said by now it matters little if Israel is explicitly mentioned at this weekâs Durban conference, calling it 'rotten to its core, and any of its follow-up events are the fruits of a poisonous tree.' He called it, 'An anti-Semitic hate fest, no matter how noble or important its original goals, shouldnât be commemorated except as a tragic error never to be repeated.'

Like others at the counter-conference, Erdan made clear the fight against racism was vital and noted, 'This does not mean that we should in any way lessen our commitment to the fight against racism. In fact, the Jewish people in Israel must be at the forefront of this fight. Nothing could be more natural than the descendants of slavery and the descendants of millennia of anti-Semitic persecution joining hands to combat discrimination and dehumanization.'

Erdan predicted more countries would boycott the conference. 'Our demand that countries refuse to participate in the Durban process does not in any way contradict what must be our equally strong demand to speak up against racism wherever it appears.' Last week the official Palestinian news agency WAFA quoted the Ministry of Foreign Affairs and Expatriates as "strongly objecting" to attacks against the Durban conference.

The statement noted, 'The Palestinian people, whose noble struggle against Israelâs apartheid continues, considers themselves an integral component in the efforts to combat all forms of systematic racism and discrimination. In this regard, Palestine rejects morally corrupt and politically sinister attempts to disconnect the Palestinian struggle to freedom from this global cause.'

'While it is good so many countries have refused to commemorate the 20th anniversary of the anti-Semitic 2001 Durban conference, this is not enough,' Herzberg said. 'The conference's anti-Semitic Declaration and Programme of Action continues to guide all U.N. activities related to countering racism and is heavily promoted by diplomats and U.N. officials. But a racist document cannot be the foundation for countering racism. The Durban declaration must be scrapped once and for all and replaced by a mechanism that actually promotes universal human rights.'"
Date
September 19, 2021
Title
Controversial U.N. conference on reparations, racism slammed by Pompeo as being ‘laced with anti-Semitism’, Fox News
Author(s)
Ben Evansky, Adam Shaw
Original Source
https://www.foxnews.com/world/un-conference-reparations-racism-pompeo-anti-semitism
Attachment
Click here to view this article in MS Word/PDF format