Defund the U.N.âs Commission of Inquiry into the Israeli-Palestinian conflict 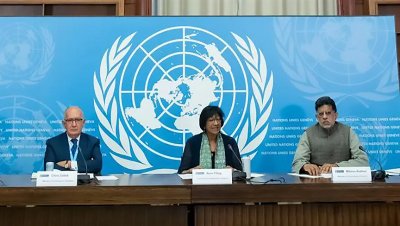 The COI was the UNHRCâs response to the May 2021 Israel-Hamas war. It claims to be dedicated to investigating âall alleged violations of international humanitarian law and all alleged violations and abuses of international human rights law leading up to and since 13 April 2021,â but given the UNHRCâs long history of anti-Israel bias and defamation, its conclusions are clearly preordained.

Arsen Ostrovsky, CEO of the International Legal Forum (ILF), called the COI âa singularly unprecedented assault upon the Jewish state at the United Nations. In many ways, this is like the U.N.âs infamous âZionism is racismâ resolution, but on steroids.â

Many members of Congress appear to agree. In March, 68 senators wrote to Secretary of State Antony Blinken, urging the Biden administration âto prioritizeâ ending the COI. In June, Sens. Jacky Rosen (D-Nev.) and Tim Scott (R-S.C.) introduced the Commission of Inquiry Elimination Act that âwould withhold funding in order to eliminate the COI.â That same month, the House Appropriations Committee passed an amendment forbidding the use of taxpayer money to fund the COI.

SFRC Chairman Bob Menendez (D-N.J.) did not respond to requests for comment. However, SFRC ranking member Sen. James Risch (R-Ind.) âsupport[s] withholding U.S. taxpayer funds to UNHRC as a way to signal our disapproval of the COIâs mandate with no end date in sight.â

Reducing U.S. funding would have an impact. According to the Foundation for Defense of Democracies (FDD), âThe United States contributes 22% of the OHCHR [Office of the High Commissioner for Human Rights]âs regular budget, far more than any other U.N. member.

The U.S. contribution accounts for approximately $29 million of the officeâs $134 million regular budget for 2022.â The U.S. also voluntarily earmarked another $26.7 million for the OHCHR last year. Put simply, the U.S. has financial leverage.

Anne Herzberg, a legal advisor at the watchdog group NGO Monitor, agrees with the campaign to âdefund and disbandâ the COI. âThe UNHRC is incapable under its current organization to conduct an impartial inquiry of Israel,â she said.

Ostrovsky stated, however, that âthere is very little likelihood under current circumstances that the Commission will be significantly revised or cancelled.â

So, what might the U.S. and its allies do? First, demand transparency. Herzberg observed, âThe COI is â¦ refusing to publish any lists of who they have met with. Based on my own investigation, I believe they have only met with anti-Zionist Israeli Jews.â

Joshua Kern of 9BR Chambers, a legal expert on international criminal law, and Herzberg âhave written at least five times to the COI seeking a meeting to discuss our research and provide a mainstream Israeli viewpoint and perspective.â That meeting has not occurred. If U.S. President Joe Biden insists that the U.S. remain on the UNHRC, then the administration should work with Volker TÃ¼rk, the newly announced UN High Commissioner of Human Rights. Orde Kittrie, a senior fellow at FDD, says TÃ¼rk could âreorientâ the UNHRC. Beyond public statements, he could appoint only those with âa proven record of independence and impartialityâ and ârefer for an auditâby either the U.N. Office of Internal Oversight Services or by the U.N. Board of Auditorsâthe blatant bias of the COI commissioners and of the special rapporteur, both prior to their appointment and in their subsequent performance.â

Ostrovsky, who doubts participation by the U.S. or any nation can reform the UNHRC, said, âCongress should urgently pass the COI Elimination Act and ensure that no U.S. funding goes towards this sham of a commission. The commission members should also be denied visa entry into the United States, where they propose to lobby Congress for support, to advance their racist objectives.â

As with so many follies at the United Nations, the American response matters. Congress should start by cutting funding to the COI."
Date
September 11, 2022
Title
Defund the U.N.âs Commission of Inquiry into the Israeli-Palestinian conflict, JNS.org
Author(s)
Melissa Langsam Braunstein
Original Source
https://www.jns.org/opinion/defund-the-uns-commission-of-inquiry-into-the-israeli-palestinian-conflict/
Attachment
Click here to view this article in MS Word/PDF format