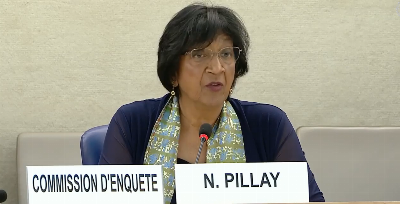 Navi Pillay (Screenshot)
"The head of a United Nations probe against Israel has come under fire after a member of the inquiry panel was quoted as saying social media was controlled by the âJewish lobbyâ and Israel, which is in âsystematic violationâ of all human rights law, and should not even be included in the globalist body.

In an interview with Breitbart, head of the International Legal Forum Arsen Ostrovsky, called the comments and Pillayâs defense of them a âdespicable new low.â

âThis is a despicable new low, even for the UN. Kothariâs accusations, which are replete with age-old antisemitic tropes, and Commission Chair Pillayâs shameful defense of him, only underscore the gross illegitimacy and bias of this one-sided inquiry against Israel,â he said of the probe, called the U.N. Independent International Commission of Inquiry on the Occupied Palestinian Territory, including East Jerusalem, and Israel (or COI for short).

The ILF in May led a global coalition of over 25 legal organizations in releasing a major report to expose what it called âthe deep bias and hypocrisyâ of the COI.

Ostrovsky went onto to say that the inquiry âshould immediately be disbanded and placed in the dustbin of the UNâs antisemitic history.â Kothari, one of three members of the COI, told Mondoweiss that Israel âtries to undermine U.N. mechanisms.â

âI would go as far as to raise the question as why are they even a member of the United Nations, because they donât respect â the Israeli government does not respect â its own obligations as a U.N. member state,â he added.

In anti-Semitic comments that were later scrubbed, Kothari said social media was âcontrolled largely by the Jewish lobbyâ and lots of money had been invested into discrediting the U.N. Human Rights Council.

The COIâs role, Kothari noted, was to examine humanitarian law, human rights law, and criminal law. âOn all three counts, Israel is in systematic violation of all the legislation,â he said.

âKothari and his fellow commissioners suggest, Israel practices the high crime of apartheid,â the report said, but went on to quote Kothari as saying: âApartheid is a useful paradigm/framework to understand the situation but not sufficient.â

In a letter to the U.N. Human Rights Council President Federico Villegas made public Thursday, Pillay said Kothariâs comments âseem to have been taken out of contextâ and that the COI âfeels it necessary to clarify certain issues given the seriousness of the accusations.â

âThe commission does not question the status or United Nations membership of either of the concerned states of its mandate,â Pillay wrote.

âHis racist remarks about âthe Jewish Lobbyâ that controls the media and his questioning Israelâs right to exist as a member of the family of nations â echo the darkest days of antisemitism,â she said.

Diplomats and officials from the US, Canada and Britain have also spoken out against Kothariâs remarks.

After the probe was announced, a large group of bi-partisan Members of Congress wrote Secretary of State Anthony Blinken, expressing grave concerns about the bias of the commission and its discriminatory singling out of Israel.

ILF called on Congress to pass legislation ensuring no U.S. funding goes towards the COI and that the commission members, each of whom have exhibited a âvisceral bias, hostility and antisemitism towards Israel, be denied entry into the United States, where they propose to lobby Congress for support,â Ostrovsky told Breitbart."
Date
July 31, 2022
Title
âDespicable New Low:â Head of U.N. Probe Against Israel Under Fire, Breitbart News
Author(s)
Deborah Brand
Original Source
https://www.breitbart.com/politics/2022/07/31/exclusive-despicable-new-low-head-of-un-probe-against-israel-comes-under-fire/
Attachment
Click here to view this article in MS Word/PDF format