Diplomatic Invective: U.N. Takes Its War on Israel to Next Level 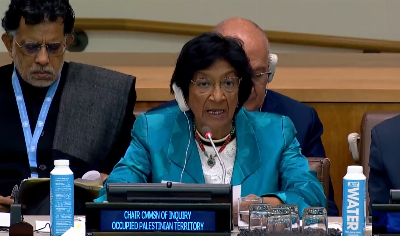 The "Commission of Inquiry," October 27, 2022 (Screenshot(
"Every number of years, Israelâs adversaries at the UN undertake an initiative whose clear intention is to undermine the very legitimacy of the State of Israel.

No one can forget the 1975 âZionism is Racismâ resolution in the UN General Assembly, which Ambassador Chaim Herzog famously tore up as he stood on the rostrum of that body. True, in 1991 the UN revoked the resolution, but it left its mark nonetheless. Trying to undermine Israelâs legitimacy remained a theme in global affairs years later; no one sought to undermine the legitimacy of France, Germany or Sweden.

More recently, the UN established a so-called fact-finding mission on the Gaza conflict, placing South African Justice Richard Goldstone at its head. In 2009, the Goldstone Report outrageously presented findings, including an assertion that the IDF had deliberately killed Palestinian civilians.

A short time later, Goldstone repudiated his own report in an op-ed in The Washington Post. But the reputation of the IDF was unquestionably tarnished by the falsehoods the UN had uncritically published and spread.

The latest UN outrage with regard to Israel has been the UN Independent International Commission of Inquiry (COI), which was established by the Geneva-based UN Human Rights Council in May 2021.

What stood out in its June 2022 report was the decision of the Human Rights Council to make the commission permanent and not limit its work to a defined period of time.

The UN resolution called on the new commission âto investigate all underlying root causes of recurrent tensions, instability and protraction of conflict.â That language constituted an invitation to create a body that would perpetually make allegations against the State of Israel. There were no time limits, especially in the investigation of âroot causes.â

The COI did not mention a word about Hamas. It only dealt with Israel, which appears 277 times in the report.

WHAT DID the COI hope to achieve?

One of its commissioners, an Australian named Chris Sidoti, was explicit on this issue. He allowed the UN to quote him, suggesting that states must move from the report that the COI issued to an actual referral to the International Court of Justice (ICJ) in the Hague. In short, he called for legal proceedings against Israel.

An initial report by the COI made the charge that Israel was âlargely to blame for the continuationâ of its conflict with the Palestinians. It was no wonder that State Department spokesperson Ned Price concluded that the COI was âunfairly singling out Israel.â

One of the arguments the COI report makes is that the Israeli presence in Judea and Samaria âis now unlawful under international law due to its permanence.â In other words, the report is saying that since 1967 the UN could not use that language, but now it feels at liberty to make that legal argument. What exactly changed? It has already been noted that while the issue of the COI came up, so did the international response to the annexation of four regions in Ukraine by Russia this past October. However, there is no basis for comparing the two territorial disputes. It must always be recalled that Israel moved into Judea and Samaria in a war of self-defense back in June 1967.

Israelâs neighbors, including Jordan, had massed their armies along its borders during the month of May. True, Jordan had annexed Judea and Samaria back in 1950, but no one recognized that action at the time with the exception of Britain and Pakistan. Russiaâs current operations in Ukraine were not in self-defense but rather looked like a war of aggression.

The only explanation for what the UN is doing with the COI is the singling out of Israel. It is a kind of diplomatic invective. It is a nasty misuse of international law and practice by taking its struggle with the Jewish state to a new level.

What can Israel do, given the predicament at the UN? There is no question that the singling out of Israel yet again at the UN requires a response."
Date
November 4, 2022
Title
Diplomatic Invective: U.N. Takes Its War on Israel to Next Level, The Jerusalem Post
Author(s)
Dore Gold
Original Source
https://www.jpost.com/opinion/article-721431
Attachment
Click here to view this article in MS Word/PDF format