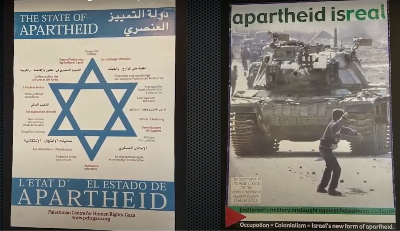 Flyers displayed at the 2001 Durban Conference
"Under the banner: 'Fight Racism, Not Jews: The UN and the Durban Deceit,' Israel's Ambassador to the United States and the United Nations Gilad Erdan, former US secretary of state Mike Pompeo, former US attorney-general Michael Mukasey, Oscar-winning actor Jon Voight and others spoke Sunday at a conference organized by Touro College, Human Rights Voices and CAMERA in a powerful head-on plea to countries to pull out of the UN conference taking place on September 22 and to stand up to todayâs antisemitism.

The event was designed as a counter-conference, as world leaders gather in New York for this weekâs UN General Assembly. The US, Australia, Italy, Croatia, Canada and Germany are among at least 18 countries boycotting one of the events over accusations of antisemitism and anti-Israel prejudice.

The event, known as Durban IV, has the theme of 'Reparations, racial justice and equality for people of African descent.' It is slated to commemorate the 20-year anniversary of the first meeting in Durban, South Africa. While the original purpose of the 2001 event was fighting racism, critics say it has been seized by anti-Israel bias and turned into an antisemitic hate fest by singling out Israel as racist and leading the US and Israel to walk out of the conference. Critics call on the UN to entirely scrap the Durban Conference on Racism and form a new conference.

Sundayâs virtual counter-event, which drew thousands of viewers, featured an eye-opening series of speakers, from diverse religious and cultural backgrounds, on what happened in Durban 20 years ago according to individuals who were present and why itâs relevant now more than ever.

'All countries that are genuinely committed to combating racism should refuse to attend Durban IV and the 20th-anniversary carnival,' said Anne Bayefsky, director of Touro Institute on Human Rights and the Holocaust, president of Human Rights Voices, and moderator of the conference. 'Thatâs why we held a counter-conference entitled âFight Racism, Not Jews.â The Durban deceit, the double-talk, the double-standards â and, in particular, the discrimination â need to be exposed and rejected, period.'

ERDAN OPENED the conference by comparing Durban to Nazi propaganda.

'As the grandchild of Auschwitz survivors, I do not like to make comparisons to the Holocaust,' he said. 'I will not say that Durban was like Kristallnacht or later Nazi atrocities. But I am reminded of a lesser-known event in Nazi history. One year before Kristallnacht, in November 1937, Josef Goebbels opened the antisemitic exhibition Der Ewige Jude, The Eternal Jew, at the library of the German Museum in Munich.

'This exhibit conveyed antisemitic messages in the most sophisticated and woke style of the era, blaming Jews for the spread of communism and the corruption of Aryan values,' he said. 'This exhibit, viewed by over 400,000 visitors, helped convey the message that Jew-hatred was not just acceptable, but something that every enlightened person should adopt. In some ways, Durban was the Der Ewige Jude exhibit of the new antisemitism.

'Therefore, friends, it matters little what will actually be said on September 22 at Durban IV, or whether or not Israel will explicitly be mentioned,' the ambassador said. 'The Durban process is rotten to its core, and any of its follow-up events are the fruits of a poisonous tree.'

Erdan called on more countries to boycott this weekâs conference.

'Our demand that countries refuse to participate in the Durban process does not in any way contradict what must be our equally strong demand to speak up against racism wherever it appears.'

Pompeo said the Durban Declaration is 'laced with antisemitism.'

'The Declaration was enthusiastically supported by terrorist leaders like Yasser Arafat, who rightly saw it not as a means to promote racial equality, but as a threat to Israelâs existence. There is no better indication of this truth than the countries which the original Durban Declaration listed as perpetrators of racism. No, not China, not Cuba nor any other bloody authoritarian regime was called out. Only Israel was identified as such,' he said.

'The Durban Conference in 2001 revived the 'Zionism is racism' slur, outrageously claimed that Israel was an apartheid state, distorted the Holocaust and made numerous Nazi analogies. It was the birthplace and catalyst of the Boycott, Divestment and Sanctions movement. These things are not things the US or any nation which values freedom and denounces antisemitism should be celebrating,' Pompeo said.

'Rather, freedom-loving nations should embrace what Israel has always been and remains today. Israel stands now, just as it always has, as the sole truly democratic state in the Middle East. Itâs a diverse nation, home to citizens of varied faiths and backgrounds.'

Voight said it was 'the duty of all good people of all faiths to express outrage and demand truth be heard.' Regarding the UN conference, he said he was 'outraged at those who make excuses for this barbarism, who manufacture the propaganda of Palestinian victimhood, who refuse to recognize that this antisemitism is capable of destroying the Jewish nation.'"
Date
September 20, 2021
Title
Erdan, Pompeo, others urge states to boycott Durban conference, The Jerusalem Post
Author(s)
Haley Cohen
Original Source
https://www.jpost.com/diaspora/antisemitism/erdan-pompeo-others-urge-states-to-boycott-durban-conference-679838
Attachment
Click here to view this article in MS Word/PDF format