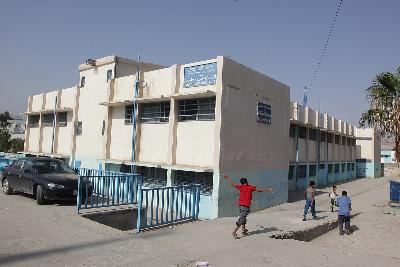 An UNRWA school (File photo courtesy Wikimedia Commons)
"Members of a high ranking body of the European Union Parliament have called on the United Nations Relief and Works Agency for Palestine Refugees in the Near East (UNRWA) to crack down on antisemitic textbooks in Palestinian schools it funds and manages.

Citing a July report on the problem by Israeli education watchdog Impact-se, EU Committee on Foreign Affairs member Reinhard BÃ¼tikofer on August 31 said he is âweary of having to go back to the same conversation year after year.â

âI think it is an easy task to make sure that no antisemitic material will ever be financed,â BÃ¼tikofer told UNRWA Commissioner General Philippe Lazzarini. âSo, please â work on the problem[s] instead of insulting those that raise them.â

Other members called the issue an âendless saga,â and vice chair of the committee MEP Å½eljana Zovko of Croatia told Lazzarini that his comments about it imply âthat we are all stupid.â

Examples include a grammar lesson that uses the sentence, âThe Palestinians sacrifice their blood to liberate Jerusalem,â and âArabic Drill Cardsâ for 9th graders which read: âWhen the [Muslim] nation is negligent in protecting al-Aqsa, then the Jews will dare to defile it.â Neither does Israel appear on any maps.

EU leaders noted that UNRWA receives much of its money from European taxpayers. A substantial portion of it is earmarked for education. Last month, the EU authorized â¬261 million in funding for the body, â¬15 million of which will pay for food in areas affected by the War in Ukraine..."
Date
September 5, 2022
Title
European Politicians Blast U.N. Official for Ignoring Antisemitism in Palestinian Textbooks, The Algemeiner
Author(s)
Dion J. Pierre
Original Source
https://www.algemeiner.com/2022/09/05/european-politicians-blast-un-official-for-ignoring-antisemitism-in-palestinian-textbooks/
Attachment
Click here to view this article in MS Word/PDF format