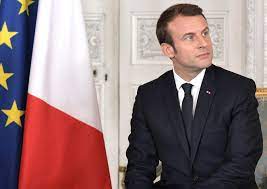 The follow-up meeting of the Durban Conference, named after the South African city where the first edition was held in 2001, is scheduled to bring together world leaders on the sidelines of the UN General Assembly in New York in September.

But the format has been controversial since its inception, with critics, led by Israel, charging that the first edition in Durban was tarnished by virulent and undisguised antisemitism.

Several countries, including France, also boycotted follow-up meetings in 2009 and 2011.

The United States, Canada, the UK, Australia, Israel and numerous other European countries have already announced they are boycotting this yearâs meeting.

The French presidency said in a statement that Macron 'has decided that France will not take part in the follow-up conference due to take place this year as he is concerned by antisemitic statements made within the Durban Conference.'

The first Durban conference â held from August 31 to September 8, 2001, just days before the terror attacks of September 11 â was marked by deep divisions on the issues of antisemitism, colonialism and slavery. Western countries believe that criticism of Israel and its occupation of the Palestinian territories frequently veered into open antisemitism.

'France will continue to fight against all forces of racism and will be watching to make sure that the Durban follow-up conference is held in accordance with the founding principles of the United Nations,' the French presidency said.

The French government has in recent days expressed concern over antisemitic slogans at protests against COVID-19 restrictions. Last month, President Isaac Herzog said the upcoming conference was 'a gathering of hatred and slander, an antisemitic event in the worst sense.'

Herzog called for countries and organizations to join together by acting 'decisively, unanimously, and fearlessly' against the Durban IV conference to ensure it does not take place."
Date
August 13, 2021
Title
France to boycott U.N. anti-racism conference, citing previous antisemitism, The Times of Israel
Author(s)
AFP and TOI Staff
Original Source
https://www.timesofisrael.com/france-to-boycott-un-anti-racism-conference-citing-previous-antisemitism/
Attachment
Click here to view this article in MS Word/PDF format