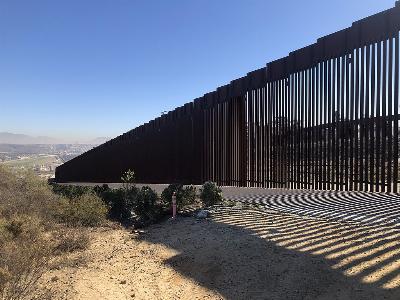 The U.S.-Mexico border wall (Photo courtesy Wikimedia Commons)
"A handful of House Republicans filed legislation this week that would freeze United Nations funding for the next two years and use that money to finish work on a wall on the southwest U.S. border.

The Close Bidenâs Open Border Act, from Rep. Bob Good, R-Va., would raise an estimated $22 billion for the border wall, as the U.S. government contributes about $11 billion per year to the U.N.

Good said repurposing the U.N. money makes sense because of prior reports indicating the U.N. is funding nonprofit groups in Mexico to help migrants make the trek through that country to the southern U.S. border. A report last year from the Center for Immigration Studies, for example, said these U.N.-funded groups are coaching migrants to talk about government persecution in their home countries, in a bid to help them qualify for asylum in the U.S.

A statement from Goodâs office on the bill quoted Rosemary Jenks of NumbersUSA, who said the U.N. is âactively assisting and encouraging the surge of illegal aliens at the U.S. border.â

âIf the U.N. insists on using its funds to destabilize the integrity of our borders, it's only reasonable that we use our share of U.N. contributions for our own border security,â Jenks said..."
Date
January 11, 2023
Title
Freedom Caucus bill takes billions from U.N. to finish the U.S. border wall, Fox News
Author(s)
Peter Kasperowicz
Original Source
https://www.foxnews.com/politics/freedom-caucus-bill-takes-billions-from-un-finish-us-border-wall
Attachment
Click here to view this article in MS Word/PDF format