Hateful legacy of the other twentieth anniversary 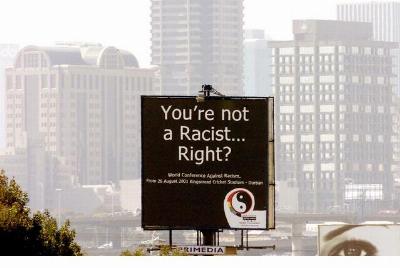 A sign posted at the 2001 Durban Conference (File photo)
"It is now 20 years since the UNâs World Conference on Racism convened in Durban in an effort to delegitimise and ultimately destroy the State of Israel in a nice, not-at-all racist way. This dismal 20th anniversary has been overshadowed by that of the 9/11 terrorist attacks, which has occasioned an outpouring of op-eds reflecting not only on what was taken from America but also on the liberties and credibility that were squandered in the War on Terror.

The UN is marking the Durban Conferenceâs anniversary by holding another conference when the General Assembly meets next week. The event is called âDurban IVâ. The mathematically inclined will correctly infer that the Jews have already been slandered at Durbans II and III, and are in for it again, in the nicest possible 'anti-racist' way.

When Durban II met at Geneva in 2009, the only head of state to attend was that lover of peace and justice, Iranâs president Mahmoud Ahmadinejad. He expounded on the 'totally racist' nature of the worldâs only Jewish state in his speech, and talked of 'the abuse of the question of the Holocaust'. The version of his remarks given to the press by the Iranian delegation referred to 'the ambiguous and dubious question of Holocaust', which suggests someone had massaged his words for the sensibilities of the UN.

To their credit, the British and European delegates walked out at Geneva when Ahmadinejad began talking. To the shame of the FCO, the UK was not among the ten countries that had boycotted Durban IIâs circus of bigotry entirely. None of them had walked out of Durban I, either.

When it became clear that this was the biggest festival of Jew-hatred to be held in a free country since Kristallnacht, only the US and Israel withdrew.

It was impressive, in a way, that under David Cameron the UK was one of 14 states to boycott Durban III, which met in New York in 2010. It was 'wrong', Cameron said, to endorse by attendance a conference that had catered to 'open displays' of antisemitism.

These conferences are described as taking place 'on the sidelines' of the UN General Assembly. Really, they should be described as occurring on the UNâs underbelly. The number of boycotting states has risen to 16 at the time of writing, and more may yet join. The EU is still attending.

Back in 2001, the EU and the NGO complex it does so much to fund and legitimate were angry at Israel for defending itself against Palestinian suicide bombers. The 9/11 attacks proved that Islamist terrorism was a problem for everyone, not just Jews, and especially a problem for Muslims. The Durban conference announced the other pincer of the modern war on the Jews: the global campaign we now call 'lawfare'.

Jewish groups in the US and elsewhere appeal to political leaders for protection again lawfare. Theyâre given gestures and statements, but at least in the US theyâve also got laws. Donald Trump extended Title VI civil rightsâ protections to Jews, and Sikhs too, on campus. What a terrible racist and anti-Semite he was.

Meanwhile, the grassroots left draws deep on the Durban poison and gets high on its own supply of infinite sanctimony, NGO-scripted universalism, and repressed Jew-hatred. This week, Burlington, Vermont nearly became the first city in America to adopt as a policy the boycott of Israel known as BDS (Boycott, Divestment, Sanctions).

Vermont is limousine liberal, Sixties-hippy country. Itâs also home to Ben & Jerryâs, which was founded by two hippies turned limousine liberal breadheads, and has lately turned on Israel, refusing to sell its ice cream in East Jerusalem or settlements on the West Bank.

The city council meeting was scheduled in between Rosh Hashanah and Yom Kippur. This is perhaps not an accident: on campus and in town halls, the anti-Israel left seeks to exploit the absence of representatives of the massively pro-Israel majority of American Jews, and install its own âas-a-Jewâ types to kosher their campaign against Israel. As in another liberal citadel, Cambridge, Massachusetts, earlier this year, the Burlington motion foundered on procedurals. In the end, the councillor who sponsored it withdrew his support.

He claimed that he 'didnât know' about antisemitism in his city until Jewish attendees at the council meeting told him, and that he now thought BDS was 'one-sided] and likely to cause antisemitism.

He also passed the BDS issue to the councilâs 'racial equity committee', the unelected commissars of nice 'anti-racism'. How much would you bet what their 'findings' will be? The fact that theyâll be 'recommendations' and 'non-binding' doesnât mean much.

The BDS supporters are waging a war of attrition on the truth. They are patiently seeding the big lie of Durban in US institutions, from colleges to city halls. They will accurately claim victory in establishing more little lies in Burlington. Sooner or later, the local Jews wonât mobilise in time, or theyâll be ambushed in council. Then Kauf nicht bei Juden will be installed on the 'anti-racist' agenda of an American city. And it wonât be a Republican-run city, either.