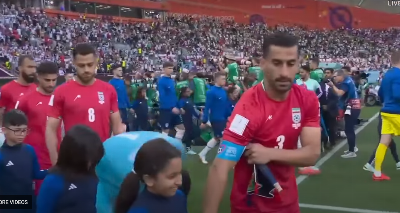 Iranian soccer players at the World Cup (Screenshot)
"Iranâs national menâs soccer team refused to sing the countryâs national anthem at the World Cup in Qatar on Monday, in an apparent act of defiance against their government, which has become the target of growing and incendiary protests.

The team stood in a line with arms around one another's shoulders, before their opening match against England, but instead of singing the words, as is traditional, the players looked stony-faced and stared straight ahead.

Englandâs players, by contrast, sang a verse of their national anthem.

The moment was not shown on state TV in Iran.

The Iranian team has enthusiastically sung the anthem in previous tournaments, including the World Cup in 2018 and the Asian Cup in 2020...

âWe have to accept that the situation in our country is not good and that our people are not happy, they are discontent,â Hajsafi said at a press conference. âWe are here, but it does not mean we should not be their voice or that we should not respect them. Whatever we have is theirs.â..."
Date
November 21, 2022
Title
Iran soccer team silent during national anthem at its first World Cup game, NBC News
Author(s)
Patrick Smith
Original Source
https://www.nbcnews.com/news/world/iran-soccer-team-silent-national-anthem-world-cup-game-rcna58121
Attachment
Click here to view this article in MS Word/PDF format