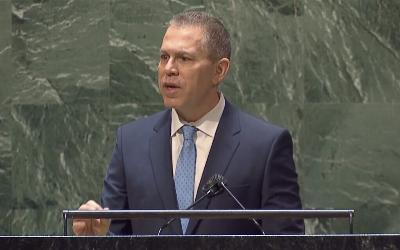 Shulamit Rachel Ovadia was killed by blows to the head from a blunt object in the Tel Aviv suburb of Holon. Police said the killing was carried out by Mousa Sarsour, a Palestinian from the northern West Bank city of Qalqilya. He was found hanged the following morning in central Tel Aviv in an apparent suicide.

Erdanâs Monday letter to UN Secretary General AntÃ³nio Guterres accused The United Nations Office for the Coordination of Humanitarian Affairs (OCHA) of 'ignor[ing]' Israelâs classification of Ovadiaâs murder as a terror attack, adding that the organizationâs 'unwillingness to swiftly condemn and appropriately label these acts of Palestinian terror only incentivizes the terrorists to continue their actions.'

'Ovadiaâs only crime was being in the wrong place at the wrong time,' the letter said.

OCHAâs report of the incident, released in late September, said that while Israel had classified Ovadiaâs murder as 'nationalistic' â meaning terroristic â it is 'disputed by Palestinian sources and human rights groups.'...