Israeli NGO, families of terror victims urge U.S. to pull out of UNHRC 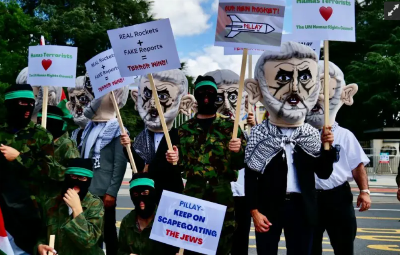 Shurat Hadin demonstration in Geneva (credit: COURTESY SHURAT HADIN)
"An Israeli legal NGO has urged the US to withdraw from the UN Human Rights Council (UNHRC) following the publication of a Commission of Inquiry (COI) that criticized Israel.

The NGO, Shurat HaDin, representing American families of the victims of terrorism, sent a letter to US Secretary of State Antony Blinken calling on the US to âpush backâ against the body's anti-Israel bias.

Combating the body's anti-Israel bias was one of the justifications used by the Biden administration when it rejoined the UNHRC, arguing that it could do so better from inside the organization rather than outside it.

However, this comes following the publication of the COI on Israel and the Palestinian territories known by many as the Pillay Commission after the head investigator, Navi Pillay.

The COI was criticized by many for what was perceived as a strong anti-Israel bias.

As such, the families of terror victims, through Shurat HaDin, are urging for the COI to be disbanded and that UNHRC agenda's item #7, a contentious item that mandates that Israel must always be discussed whenever the UNHRC convenes, be abolished.

Notably, no other country is singled out in this manner aside from Israel.

Words are not enough

âWords are not enough. Actions are needed. Lack of action undermines any moral justification to rejoin to UNHRC. The duty to uphold the fundamental values and human rights is not fulfilled by statements - by empty words,â the families argued. âThere is no middle road when facing this antisemitic evil.â

It added: âTo stand by as Israel is repeatedly and unfairly pummeled dangerously adds American legitimacy to the witch-hunts and blood libels.â

âLast week, at the very same time Shurat HaDin protested outside the UN Human Rights Council building in Geneva, Navi Pillay published her updated edition of the 'Elders of Zion,' scapegoating once again, the Jews for all injustices in the world,â Shurat HaDin president Nitsana Darshan Leitner said in a statement.

âYet, so far we have only heard hollow statements from the State Department but no real counteraction to the dangerous rise of modern antisemitism, all sponsored and paid for by the American taxpayer. This must stop immediately â the US must effectively act against the UNHRC or walk away from it.â"
Date
June 15, 2022
Title
Israeli NGO, families of terror victims urge U.S. to pull out of UNHRC, The Jerusalem Post
Original Source
https://www.jpost.com/international/article-709487
Attachment
Click here to view this article in MS Word/PDF format