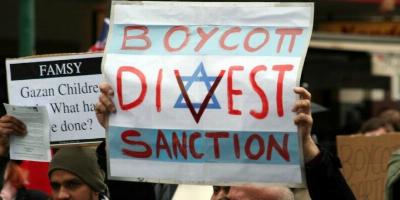 A pro-BDS demonstration. (Photo Courtesy Wikimedia Commons)
"Leading Jewish organizations welcomed the Biden administrationâs decision to stick to the US policy of not attending any events to celebrate the 20th anniversary of the Durban Declaration in September due to their 'anti-Israel sentiment.'

A US State Department spokesperson told The Jerusalem Post Monday that the US would not take part in planned Durban anniversary events, saying that it 'remains deeply committed to combating antisemitism at home and abroad. Furthermore, the United States stands with Israel and has always shared its concerns over the Durban processâs anti-Israel sentiment â used as a forum for antisemitism and freedom of expression issues.'

Commenting on the decision, Bânai Bârith International said it 'salutes the US administration for taking a principled decision, like its predecessors, to deny legitimacy to a UN framework that purports to fight prejudice but is fundamentally marred by it.'

'The 2001 conference was poisoned by manifestations of virulent anti-Zionism and open antisemitism. We urge all countries of goodwill to do similarly â and we will continue to insist that all forms of hate, including those targeting Jews, not be given a platform by foremost international institutions,' Bânai Bârith stated.

The UN is scheduled to hold a special âDurban IVâ event on Sept. 22 to mark the 20th anniversary of the World Conference on Racism in Durban, South Africa, from which the US and Israel previously withdrew over objections of anti-Zionism. Israel was singled out from the Durban conference declaration and was depicted as being racist and as committing 'crimes against humanity,' 'ethnic cleansing,' 'apartheid' and 'genocide' against the Palestinians.

Michal Cotler-Wunsh, a former member of Knesset for Israelâs Blue and White Party, said: 'Durban was the ecosystem for declared escalation in the war waged on Israel, weaponizing international law and itâs institutions. The orchestrated, systematic implementation of this strategy threatens not only Israel, but shared values and foundations of democracy and human rights.'â
Date
May 4, 2021
Title
Jewish Groups Applaud U.S. Decision to Stay Away From âAnti-Israelâ Durban IV Events in September, The Algemeiner
Author(s)
Sharon Wrobel
Original Source
https://www.algemeiner.com/2021/05/04/jewish-groups-applaud-us-decision-to-stay-away-from-durban-iv-conference-in-september/
Attachment
Click here to view this article in MS Word/PDF format