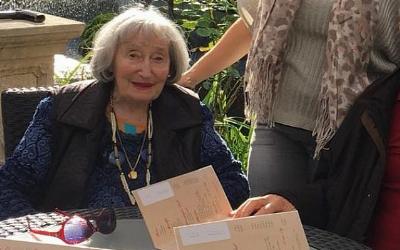 Mireille Knoll, 85, a Holocaust survivor who was found murdered in her Paris apartment (Courtesy)
"The murder trial that compelled France to confront the violent antisemitism in its midst came to a dramatic close on Wednesday, as a court in Paris sentenced one of the two men accused of the brutal killing of Mireille Knoll, an 85-year-old Holocaust survivor who suffered from Parkinsonâs Disease, to life imprisonment.

Following almost ten hours of deliberation by the jury, 32-year-old Yacine Mihoub, a former neighbor of Knollâs, was found guilty of murder aggravated by antisemitic hatred. The terms of Mihoubâs life sentence require that he serve a minimum of 22 years.

The second accused man, Alex Carrimbacus, Mihoubâs 25-year-old associate, was acquitted on the murder charge but found guilty of aggravated theft. The court sentenced him to a 15-year prison term...

Throughout the trial, which began on Oct. 26, lawyers for the Knoll family stressed the antisemitic element behind the killing. A police investigation following Knollâs death established that Mihoub was a regular visitor to Islamist and antisemitic websites, and was already known to the authorities for having praised the Kouachi brothers, Islamist terrorists who carried out the deadly attack against the satirical magazine Charlie Hebdo in Jan. 2015..."
Date
November 10, 2021
Title
âJustice Has Been Doneâ: Antisemitic Murderer of Holocaust Survivor Mireille Knoll Sentenced to Life Imprisonment by French Court, The Algemeiner
Author(s)
Ben Cohen
Original Source
https://www.algemeiner.com/2021/11/10/justice-has-been-done-antisemitic-murderer-of-holocaust-survivor-mireille-knoll-sentenced-to-life-imprisonment-by-french-court/
Attachment
Click here to view this article in MS Word/PDF format