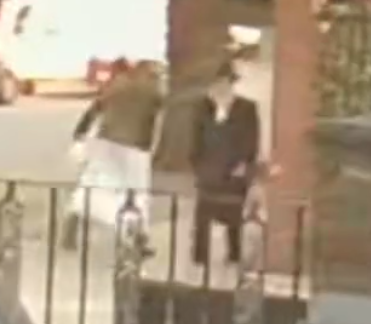 Security footage shows a tall suspect punching a 64-year-old haredi Orthodox Jewish man as they pass one another on the street in the heavily-Jewish neighborhood of Stamford Hill. The victim sustained broken bones and head injuries, Shomrim, a Jewish security service, wrote on Twitter.

Earlier in the day, the same man punched a Jewish child in the neighborhood, Shomrim said. The child was not seriously hurt. Shomrim said they believed the incidents were hate crimes against Jews.

In a separate incident on Aug. 12, a 72-year-old man was slapped and had his kippah knocked off his head in another suspected hate crime in London.

That man, Ronnie Phillips, was walking near Wyndham Theatre on Charing Cross Road, in the cityâs center, with his wife, the Jewish News of London reported.

The assaults are part of a major increase in the number of antisemitic incidents recorded in the United Kingdom this year by CST.

In the first half of 2021, CST recorded the highest-ever number of antisemitic incidents in any six-month period since it began monitoring the issue in the 1980s. The tally for January-June in 2021 was 1,308 incidents, compared to 875 in the corresponding period the previous year. The total for 2020 was 1,668 incidents..."
Date
August 24, 2021
Title
London police looking for man who assaulted Jewish man and child, The Jerusalem Post
Author(s)
Cnaan Lipshiz/JTA
Original Source
https://www.jpost.com/diaspora/antisemitism/london-police-looking-for-man-who-assaulted-jewish-man-and-child-677550
Attachment
Click here to view this article in MS Word/PDF format