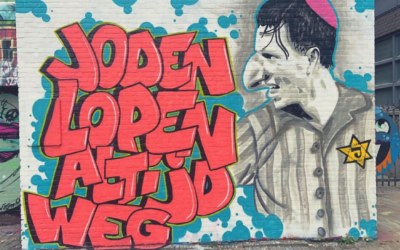 A mural caricature of soccer player Steven Berghuis depicts him as a hooked-nosed Jew in Rotterdam, the Netherlands, July 2021. (CIDI)
"The number of antisemitic incidents recorded in the Netherlands reached a 10-year high of 183 cases in 2021, a Dutch Jewish watchdog group said.

The 2021 tally was a 35-percent increase over the previous year, said the Hague-based Center for Information and Documentation on Israel, or CIDI.

At least 72 of the incidents happened in what the CIDI called 'real-life' conditions, meaning in physical spaces and not online. Of those, 21 were acts of vandalism and three incidents were violent assaults.

In one assault, three men punched a Jewish man and his sister on the street in western Amsterdam. The woman was wearing traditional Jewish Orthodox clothes and had a mask with a star of David on it that she got from the Jewish old age home Beit Shalom while volunteering there.