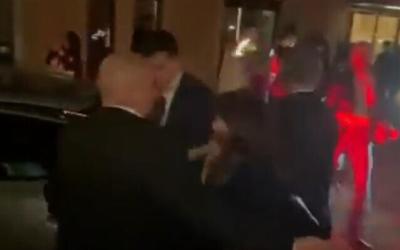 Israeli Ambassador the UK Tzipi Hotovely is seen being evacuated under heavy security from an event at the London School of Economics on November 9, 2021 (Screencapture/Twitter)
"Priti Patel, the UK home secretary, has given support to a police investigation of protests outside the London School of Economics on Tuesday night that led to the Israeli ambassador being led away at speed with heavy police protection after addressing a meeting with students.

A large group of protesters gathered outside the building at which Tzipi Hotovely spoke. Video from the scene showed security guards rushing Hotovely, who was clutching a bouquet of flowers, into a vehicle, while others tried to fend off a group of jeering and booing activists, who chanted, 'Shame on you!' At least one protester tried to rush towards her.

Patel tweeted that she was 'disgusted' by the treatment of the Israeli ambassador, and that antisemitism had no place in Britain, adding that she would continue to do everything possible 'to keep the Jewish community safe from intimidation, harassment and abuse'. She said she had been in touch with the ambassador and that the police had her full support in investigating the matter.

Hotovely said afterwards: 'We will not give in to thuggery and violence. The state of Israel will send its representatives to every stage.'

Sharing the video, the education secretary, Nadhim Zahawi, said it was 'deeply disturbing', adding that he was 'so sorry' to Hotovely.