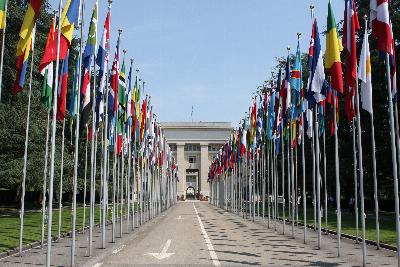 The United Nations in Geneva (File photo courtesy Wikimedia Commons)
"A group of pro-Israel organizations submitted nearly two million examples of repression of Jews and violation of their human rights to the UN Human Rights Council Commission of Inquiry on the Israeli-Palestinian conflict over the past three months.

The COI was established last year as an open-ended inquiry into the conflict, whose members all have made past comments accusing Israel of war crimes. Its chairwoman is Navi Pillay, the former UN Commissioner for Human Rights who appointed four fact-finding missions targeting Israel, more than any other country, including the Goldstone Report, later discredited by its lead author, chose deeply anti-Israel professor of international law Richard Falk as special rapporteur for the Palestinians, and convened the Durban II conference against racism, which gave antisemitic former Iranian president Mahmoud Ahmadinejad a platform to deny the Holocaust.

The inquiry began with a call for submissions about the âroot causesâ of the Israeli-Palestinian conflict, including evidence of human rights violations, such as racial and religious discrimination and repression with âno temporal restrictions,â meaning they can be from before Israel was established.

Prof. Anne Bayefsky of Touro College in New York, a human rights activist and critic of the UN, had both organizations she leads, Human Rights Voices and the Touro Institute on Human Rights and the Holocaust, submit examples of the repression and discrimination against Jews in the Arab and Muslim world.

Bayefsky expressed certainty the COIâs findings will be âan all-out offensive on a Jewish state from its Jewish essence to the necessities of its survival â economic well-being and the right of self-defense.â

Still, the organizations gathered names of specific victims, including hundreds of thousands of Holocaust victims and Jews who fled persecution and ethnic cleansing in the Middle East and North Africa, including a synopsis of tribulations of Jews in those regions.

They also wrote about the Grand Mufti of Jerusalem Hajj Amin al-Husseiniâs collaboration with the Nazis and role in inciting mass violence against the Jewish people â such as in the Farhud pogrom in Iraq in 1941 â as well as his impact on Palestinian society today.

In addition, they disseminated the UNâs link for submissions. Among those who used the link was Stuart Force, the father of Taylor Force, a West Point graduate killed in a Palestinian terror attack while visiting Israel in 2016.

Other organizations joined the efforts as well: Palestinian Media Watch and The Middle East Media Research Institute (MEMRI) submitted photos, videos and original documents detailing decades of Palestinian incitement to violence against Jews and Palestinian efforts to erase Jewish history and terminate the Jewish state, as well as the Palestinian Authorityâs âmartyr paymentsâ to families of terrorists.

The Meir Amit Intelligence and Terrorism Information Center collected data on Palestinians who the UN has falsely called innocent civilians that are victims of Israeli crimes, and photographic and video evidence of terrorism by Palestinians.

The American-Israeli Cooperative Enterprise submitted Jewish historical research and analysis on Arab wars against Israel, Palestinian terror and antisemitism and anti-Zionism, and the Committee for Accuracy in Middle East Reporting and Analysis (CAMERA) wrote about âroot causesâ of antisemitism like blood libels, apartheid claims and efforts by Palestinians and fellow travelers to delegitimize Israel.

âThe question now is how this team will treat the unparalleled list placed before the UN of Jewish victims ofâ¦Palestinian hate,â Bayefsky said. âThe almost two million unique submissions and named Jewish victims will be twisted, misrepresented or ignored by the inquiry. As the chair has repeatedly done in the past, Pillay is expected to do everything possible not only to demonize Israel, but also to disparage the inquiryâs critics as extremists and shady Israel lobbyists, instead of serious lawyers, experts, historians, political scientists and religious authorities.â

âIgnoring the massive numbers of specific names of Jewish victims, and the detailed analyses submitted and publicly logged online, will serve to discredit the inquiry. When the UN report negates the voices of Jewish and Israeli human rights victims, these submissions will help ensure the report is met with the derision it deserves,â she added.

Israel objects to the COI and will not cooperate with it, and therefore has not made any submissions, which Bayefsky said shows Israel understands it is a âkangaroo court,â and that âthe UN is not supposed to be a suicide pact for member states.â

âIn the absence of Israelâs participation, the Inquiry was poised to crow it had no choice but to find against it,â Bayefsky said, explaining the motivation for NGOs to expose the charade.