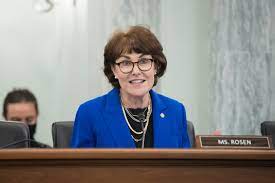 Senator Jacky Rosen (Courtesy)
"Today, U.S. Senators Jacky Rosen (D-NV) and Tim Scott (R-SC) announced the introduction of their bipartisan Commission of Inquiry (COI) Elimination Act, which would make it U.S. policy to seek the abolition of the United Nations Human Rights Council (UNHRC) Commission of Inquiryâs (COI) targeted and biased investigation against Israel, and would withhold funding in order to eliminate the COI.

âThe UN Human Rights Councilâs Commission of Inquiry unfairly holds Israel to a standard not imposed on any other country, does nothing to advance the prospects for peace between Israel and the Palestinians, and undermines their credibility to investigate human rights violations around the world,â said Senator Rosen. âCongress has a long history of codifying the United Statesâ opposition to biased attacks against Israel, which is why Senator Tim Scott and I are introducing this bipartisan legislation. Itâs time to make it U.S. policy to withhold funding and abolish this one-sided Commission.â

âThe UN Human Rights Councilâs decision to investigate Israel â the only democracy in the Middle East â is simply outrageous,â said Senator Scott. âWhile dictators like Vladimir Putin, Xi Jinping, and Kim Jong-un commit human rights violations with impunity, the councilâs misguided inquiry only further undermines its credibility on the world stage. I urge my colleagues to pass this bill to support our ally Israel and ensure American taxpayers are not forced to fund the UNHRCâs discriminatory investigation.â

In May 2021, shortly after the Gaza conflict, the UNHRC greenlit this open-ended investigation of Israelâs actions throughout the entire Israeli-Palestinian conflict. After the United States returned to the UNHRC, Senator Rosen joined a bipartisan group of 68 senators in sending a letter urging the Biden Administration to lead a multinational effort to end the COI. On June 13, 2022, the United States led a group of 22 countries expressing deep concern about the COI, condemning the disproportionate treatment of Israel at the UNHRC, and calling on the UNHRC to address all human rights concerns, regardless of country, in an even-handed manner. The American Israel Public Affairs Committee (AIPAC) supports this legislation."
Date
June 14, 2022
Title
Senators Rosen, Scott Introduce Bill to Halt United Nationsâ Commission of Inquiry on Israel, Office of Senator Jacky Rosen
Original Source
https://www.rosen.senate.gov/rosen-scott-introduce-bill-halt-united-nations-commission-inquiry-israel
Attachment
Click here to view this article in MS Word/PDF format