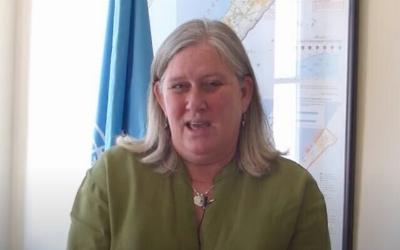 OCHA OPT Head Sarah Muscroft speaks in a video address on June 10, 2021. (Screen capture/YouTube)
"The UN has removed the head of one of its offices serving the Palestinians after she posted a tweet in which she condemned Palestinian Islamic Jihadâs âindiscriminate rocket fireâ during the recent Gaza conflict, a UN spokesperson has confirmed to The Times of Israel.

The revelation came days after Sarah Muscroft tweeted her support for the ceasefire between Israel and the Palestinian terror group after three days of fighting.

Muscroft, who headed the United Nations Office for the Coordination of Humanitarian Affairs in the Occupied Palestinian Territory, said: âRelieved to see a ceasefire agreed ending hostilities impacting both Palestinians and Israeli civilians. Such indiscriminate rocket fire of Islamic Jihad provoking Israeli retaliation is condemned. The safety of all civilians is paramount â the ceasefire must be upheld.â

Muscroft, who had been based in East Jerusalem, came under massive criticism from pro-Palestinian activists who said she was blaming Palestinians for the latest round of violence and was failing to hold Israel responsible.

The latest Gaza conflict began with several Israeli airstrikes against Islamic Jihad targets in response to what the army said was a concrete terror threat from a PIJ cell to fire anti-tank missiles across the border at Israeli troops or civilians. The strikes were followed by the firing of nearly 1000 rockets by PIJ as well as roughly 170 Israeli counterstrikes.

Muscroft later deleted the post and tweeted an apology the next day, saying that âone of my previous tweets was ill-informed and I have deleted it. I sincerely apologize for my poor judgment. All civilians â everywhere â must be able to live in peace.â

But on Saturday, an OCHA spokesman in Geneva told The Times of Israel that Muscroft âwill be assigned to a new role.â It was not clear whether she would remain in East Jerusalem..."
Date
August 13, 2022
Title
Senior UN official loses her post after tweet condemning Palestinian Islamic Jihad rocket fire at Israel, The Times of Israel
Author(s)
Jacob Magid
Original Source
https://www.timesofisrael.com/senior-un-official-loses-post-after-tweet-condemning-pij-rocket-fire-at-israel/
Attachment
Click here to view this article in MS Word/PDF format