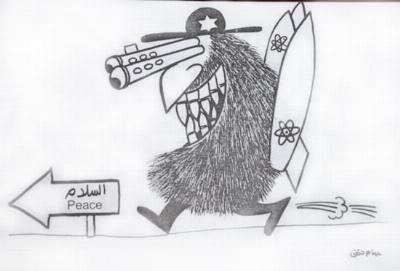 An image distributed at the 2001 Durban Conference
"It wasnât a world-changing scoop, but as I pressed the send button in 1991, I knew the story could change the future of the worldâs deliberative body. What I had learned was that America would soon successfully persuade the United Nations to repeal its infamous Zionism is 'a form of racism and racial discrimination' resolution that sought to negate Israelâs right to exist.

Now, the ugly spirit, if not the actual language, of that resolution will be celebrated this week at U.N. headquarters.

On Wednesday, a 'high level' meeting will commemorate the U.N.'s 2001 world conference in Durban, South Africa, that had the laudable goal of taking on critical issues such as racism, discrimination, xenophobia and intolerance.

But the atmosphere outside a parallel conference for non-government groups turned so toxic that a Holocaust survivor, the late Rep. Tom Lantos, D-Calif., called it 'the most sickening and unabashed display of hate for Jews I had seen since the Nazi period.'

Activists distributed flyers that argued that if Hitler had won World War II, the modern state of Israel wouldn't have been established. Others in attendance sold copies of a virulently antisemitic tract, 'The Protocols of the Elders of Zion.'

One person at the conference held a sign reading, 'Hitler should have finished the job.'

And Israeli and Jewish attendees, fearing for their safety, hid gear that gave away their religious and national identity.

Now, the United Nations is commemorating that shameful conference as world leaders gather in New York. It's certainly fair game to criticize Israel, and I've written about plenty of it. But needlessly including the hateful 20-year-old Durban baggage cheapens what could have been an important discussion on remedying racism.

My hope that the U.N. would one day make the world a much better place was shattered a long time ago. But in perilous 2021, there shouldnât be a minute to spare when global leaders convene to talk about critical issues such as the COVID-19 pandemic and climate change.

Thankfully, the Biden administration announced in May that neither the president nor anyone from the U.S. delegation will attend today's meeting.

A State Department spokesperson told The Jerusalem Post that America 'remains deeply committed to combating antisemitism at home and abroad. Furthermore, the United States stands with Israel and has always shared its concerns over the Durban processâ anti-Israel sentiment, use as a forum for antisemitism and freedom of expression issues.'

Israel's U.N. Ambassador Gilad Erdan tweeted that he believes 31 nations will boycott today's meeting, from Australia to the United Kingdom. But other major countries, including China, plan to participate, reopening old wounds that should have been left alone.

After my 1991 article, it was an era of good feeling. I highlighted a wrong while hitting a home run in the journalistic world. My USA TODAY article was cited on the front page of The New York Times. And several months later, the infamous 1975 resolution was rescinded.

It was the right move to help restore the battered reputation of the world body. But as post-Cold War era cooperation of the 1990s faded, so did the notion of not bashing Israel and Jews under U.N. auspices.

Other nations should boycott

Alexandr Vondra, a Czech member of the European Parliament, warns in general about the U.N. tendencies on Israel in the post-Holocaust era: 'We Europeans have a special duty ... to ensure that the U.N. system is no longer misused to vilify the world's only Jewish state.'

I used to find it fascinating to walk into U.N. headquarters amid the flags of the world lining First Avenue in New York. But now, U.N. member nations need to honor their flags and not walk into Wednesdayâs poisonous program. At the imposing U.N. headquarters, they need to fully live up to the words many ordinary Americans display against bias: Hate has no home here."
Date
September 22, 2021
Title
‘Sickening’ display of hate: Why world leaders should boycott U.N.’s Durban event, USA Today
Author(s)
Lee Michael Katz
Original Source
https://www.usatoday.com/story/opinion/voices/2021/09/22/antisemitism-boycott-united-nations-durban-commemoration/5800956001/
Attachment
Click here to view this article in MS Word/PDF format