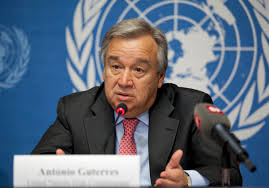 U.N. Secretary-General Antonio Guterres (File photo)
"With the announcement by President Macron that France is joining growing boycott of Durban IV, the SWC is urging UN Secretary General Guterres to cancel the 20th anniversary celebration of the Durban Conference Against Racism, which devolved into an anti-Semitic Hatefest.

The US, UK, France, Germany Australia, and other nations have already announced they are boycotting next monthâs event at the UN. âWith raging anti-Semitism, it is past due for the UN to finally bury Durban, not celebrate it,â declared Rabbi Abraham Cooper, SWC Associate Dean and Director of Global Social Action of the international Jewish NGO.

'As the spokesman for Jewish groups at Durban in 2001 and along with my Jewish delegates were targets of verbal abuse and physical attacks itâs outrageous that there is an attempt to resurrect the horrific âachievementsâ in the halls of the General Assembly. Enough!'â
Date
August 13, 2021
Title
Simon Wiesenthal Center Urges Secretary General Guterres to Cancel 20th Anniversary of Anti-Semitic Durban Conference, The Simon Wiesenthal Center
Original Source
https://www.wiesenthal.com/about/news/simon-wiesenthal-center-urges-20.html
Attachment
Click here to view this article in MS Word/PDF format