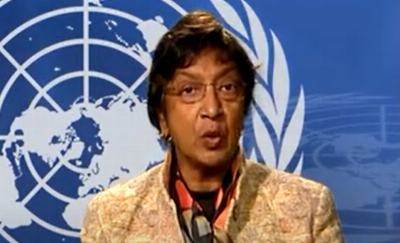 Navi Pillay (Screenshot)
"A few days ago, Israelâs Ambassador to the United Nations Gilad Erdan was elected as a vice president of the U.N. General Assembly. He will thus chair its meetings and help set its agenda when it assembles for its next annual session in September.

This was a rare diplomatic victory for Israel at the United Nations, and the latest example of the vigorous pushback being mounted by Israeli diplomats against the institutionâs bigoted hostility. âNothing will stop meâand I mean nothingâfrom fighting the discrimination against Israel,â said Erdan.

Heâll have his work cut out for him. On the very same day, a report by the commission of inquiry led by Navi Pillay into âalleged violationsâ of international law in âthe Occupied Palestinian Territory, including East Jerusalem, and in Israelâ was posted on the U.N. website.

This 18-page reportâto be presented to the U.N. Human Rights Council (UNHRC) on June 13âis an egregious example of precisely that discrimination.

A tissue of malevolent falsehoods, distortions and misrepresentations of international law, the report makes only passing reference to Palestinian terrorism and the thousands of Hamas rocket attacks on Israeli civilians which constitute actual war crimes. Instead, it suggests entirely falsely that Israelâs âperpetual occupationâ is the root cause of the conflict.

It is, in short, little more than Hamas and Palestinian propaganda. This is hardly surprising since Pillay had consulted with Palestinian and Israeli groups dedicated to harming and destroying Israel.

Yet she has the gall to claim that her inquiryâs findings are âoverwhelmingly directed towards Israelâ because of the âasymmetrical nature of the conflict and the reality of one state occupying the other.â So she doesnât even seem to grasp the basic fact that there is not and never has been a Palestinian state as âthe otherâ for Israel to occupy.

Nor, of course, does she acknowledge that her own role is a key weapon in the war to destroy Israel through distortion, demonization and delegitimization.

She was chosen for this role because of her record of bigoted hostility towards Israel. Her two fellow commissioners, Miloon Kothari and Chris Sidoti, share her bias.

Pillay has repeatedly used the âapartheidâ canard against Israel and called for it to be boycotted and sanctioned. She championed the U.N.âs Durban Review Conference in 2009, which sought to reaffirm the notorious 2001 Durban âanti-racismâ conference that turned into a sickening anti-Jewish hate-fest.

In June last year, mere weeks after the Israel-Hamas war, Pillay signed a letter to U.S. President Joe Biden decrying Israelâs âdomination and oppression of the Palestinian people,â and calling on America to âaddress the root causes of the violenceâ by ending Israelâs âever-expanding discrimination and systemic oppression.â

Ignoring the fact that Palestinian Arabs had turned the Al-Aqsa mosque into a theater of war from which they hurled rocks down at Jewish worshippers and Israeli police, she claimed that Israeli forces had conducted âaggressive actionsâ against âpeaceful protesters and worshippers.â This amounted to the âforced dispossession of Palestiniansâ and was the âlatest evidence of a separate and unequal governing system.â

As head of U.N. Watch Hillel Neuer has commented: âAppointing Navi Pillay to investigate Israel has all the credibility of appointing Vladimir Putin to investigate Ukraine.â

Her commission of inquiry itself has all the trappings of a mind-twisting kangaroo courtâverdict first, evidence to followâstraight out of the Soviet playbook.

For the United Nations gave it a mandate in perpetuity to report annually on alleged war crimes and discrimination going right back to the establishment of the State of Israel. Applied to no other country, the world body has thus singled out Israel for a permanent inquisition, which has already decided on its guilt by virtue of Israelâs existing at all.

The UNHRC itself has a long history of eye-watering hostility and injustice towards Israel. The infamous Item 7 on its standing agenda singles it out for a unique category of criticism in every session.

As a body ostensibly devoted to upholding human rights, the UNHRC is a farce. Tyrannies such as China, Russia, Cuba and Pakistan are among the 15 countries that have won seats on the council.

It routinely ignores violations by despotic regimes while perversely and egregiously targeting its condemnations instead at Israel. Since 2006, the council has adopted 90 resolutions condemning the Jewish stateâmore than all the resolutions against Syria, North Korea and Iran combined.

What is intolerable is the acquiescence of the leaders of the free world to this betrayal of the core mission of the United Nations.

Both Britain and America are members of the UNHRC. The United States rejoined it last year, reversing the decision by the Trump administration in 2018 to leave it over its âchronic biasâ against Israel.

This week, the U.S. State Department criticized the Pillay report for its âone-sided, biased approach.â It said: âThe existence of this [Commission of Inquiry] in its current form is a continuation of a longstanding pattern of unfairly singling out Israel.â It added: âIsrael is the only country subject to a standing agenda item at the HRC and has received disproportionate focus at the HRC compared to human rights situations elsewhere in the world.â

All very true. But itâs no use then saying, as it did, that the United States ârejoined the HRC in part to be in a better position to address its flaws, including this one, and we will continue to seek reforms.â If this is to have any meaning at all, the United States must ensure Pillayâs removal. After all, her appointment contradicted the U.N.âs own guidelines which, as UN Watch said in its request for Pillay to recuse herself, make clear that members of commissions of inquiry must have âa proven record of independence and impartiality.â

Even Pillayâs removal, however, wouldnât address the core problemâthe institutionalized bias of the United Nations itself. For it acts as the crucible of the campaign to delegitimize and destroy Israel.

Since 2015, the U.N. General Assembly has passed 125 resolutions condemning Israel, compared with six against Iran; seven against North Korea; nine against Syria; 18 against Russia; eight against the United States; and none against China, Cuba, Libya, Turkey, Pakistan or Venezuela.

Last September, the U.N. Economic and Social Council condemned Israel alone for allegedly violating womenâs rights, even though Israel is the only upholder of womenâs rights in the Middle East.

All this reflects the fundamental flaw at the heart of the United Nations itself. Committed to promoting freedom, justice and human rights for everyone, it is dominated by countries that stand for the negation of those things. So it betrays its core commitment virtually every day.

The fact that it singles out Israel for condemnation as a human-rights abuser when it is in fact the sole democracy in the Middle East and deeply committed to human rights is a travesty. The fact that it has now put in charge of this onslaught a woman who has endorsed the anti-Jewish lynch mob at the United Nationsâ own disgusting Durban conference is obscene.

Yet America and the rest of the free world continue to treat it as the legitimate arbiter of global peace and justice.

The United Nations is the most conspicuous example of the fundamental mistake the free world makes over and over again. This is that, by refusing to acknowledge the true and unique characteristics of anti-Semitism, it fails to understand that the worldâs oldest and most enduring hatred doesnât just affect the Jewish people. It also signals the corrosion and eventual destruction of the culture that spawns it.

The continuing support by the free world of the fundamentally corrupted United Nations is a major factor behind the destruction of the westâs moral compass and its current spiral of decline."
Date
June 9, 2022
Title
The anti-Israel travesty of Pillayâs kangaroo court, JNS.org
Author(s)
Melanie Phillips
Original Source
https://www.jns.org/opinion/the-anti-israel-travesty-of-pillays-kangaroo-court/
Attachment
Click here to view this article in MS Word/PDF format