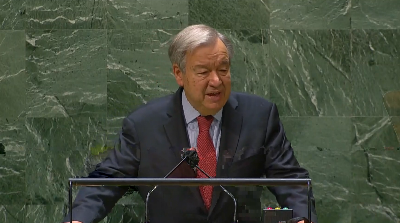 When I first heard in 1997 about the prospective World Conference against Racism to be held in Durban in September 2001, I greeted it with both anticipation and excitement. This was to be the first World Conference against Racism of the 21st century. It was to be the first international human rights conference of the 21st century with anti-racism as its organizing theme. And it was to take place in Durban, South Africa, the birthplace of South African apartheid, where, as someone involved in the anti-apartheid movement, I was arrested in South Africa in 1981, became a member of Nelson Mandelaâs international legal team, and engaged in the work. I have returned often to South Africa since.

But what happened at Durban was, to use an oft-abused metaphor, truly Orwellian. A conference to combat racism turned into a conference of racism and hate against Israel and the Jewish people. A conference to herald the promotion and protection of international human rights in the 21st century singled out one member state and people for selective opprobrium and indictment, holding out Israel and the Jewish people as the enemy of all that is good and the embodiment of all that is evil. A conference to commemorate the dismantling of South African as an apartheid state became a conference calling for the dismantling of Israel as an apartheid state.

I participated in the Durban conference, both as a member of the official Canadian delegation, and a witnessed to the NGO forum, and Durban has indelibly imprinted itself on both my memory and my being. I can still see the marches in the streets, and still hear the chants: 'The struggle against apartheid in the 20th century required the dismantling of South Africa as an apartheid state, and the struggle against apartheid in the 21st century requires the dismantling of Israel as an apartheid state.'

On September 10th, I flew back from South Africa to Canada. On September 11th, we witnessed 9/11. As one of my colleagues put it at the time, 'If 9/11 was the Kristallnacht of terror, then Durban was the Mein Kampf.'

Those of us who personally witnessed the Durban festival of hate have forever been transformed, by the pamphlets and posters of hate and antisemitism; the cartoons and leaflets depicting Israelis as Nazis and Jews with fangs and hooked noses; who were solicited with the notorious antisemitic tract 'The Protocols of The Elders of Zion.' We witnessed demonstrators with signs that 'Hitler should have finished the job,' and we witnessed Jewish students physically threatened with mobs screaming, 'You donât belong to the human race.'

For us, Durban is part of our everyday lexicon as a byword for hate and antisemitism, just as 9/11 is a byword for terrorist mass murder. Simply put, Durban emerged as a 'tipping point' for a new wave of antisemitism masquerading as anti-racism.

It should not be surprising that this hateful 'Durban- speak' became a legitimizing instrument for a new wave of antisemitism in the immediate aftermath of 9/11 and since, as evidenced by the following examples: â¢ The Jews were blamed for 9/11 in a set of new 'protocols,' reflective of what some saw as a new international Jewish conspiracy â and which has now found expression 20 years later in graffiti to that effect in Montreal and elsewhere.

â¢ A global campaign against Israel as an 'ethnic cleansing, criminal, and apartheid state' was launched in the immediate aftermath of post-Durban calls for the dismantling of Israel as a 'racist apartheid state.' The first UN Human Rights Commission meeting in the aftermath of Durban sought to single out Israel for differential and discriminatory treatment with a majority of all resolutions passed indicting Israel, while the major international human rights violators, such as Libya, Sudan, Syria, and Iran, enjoyed exculpatory immunity. A meeting at the University of Michigan that served as a launching pad for the BDS Movement rejected a resolution 'calling for a two-state solution if Israel were to become a democratic state' â problematic in itself â in favor of a resolution 'calling for the dismantling of Israel as a racist apartheid state.'

Twenty years later, the Durban legacy of hate finds expression not only in the old/new escalating, global antisemitism, but where this antisemitism is underpinned by a series of dynamics that are not as well appreciated as they should be.

First, the mainstreaming, the normalization, the legitimation of antisemitism in the political culture â and the absence of outrage, underscored by indifference and inaction.

Second, the marginalization of antisemitism in the overall struggle against racism, where, for example, education and training within and without government tends to marginalize, if not even exclude, antisemitism.

Third, the laundering of antisemitism under the very cover of anti-racism, where Jews are seen as part of the white oppressor class and Israel, and the Jewish people, as part of the white oppressor regime. Fourth. the revival of the classic antisemitic trope of the Jews as 'the poisoners of the international wells,' where Jews, the Jewish people, and Israel are blamed for the manufacture of the coronavirus, for its spread, and for profiting from it.

None of this is intended to suggest that Israel is somehow above the law, or that Israel is not accountable to the international community like any other state. Nor are Israel or the Jewish people entitled to any privilege or preference because of the horror of the Holocaust or the threat of antisemitism. The problem is not that anyone should seek to place Israel above the law, but that Israel is being systematically denied equality before the law in the international arena.

On July 21, the Canadian government held the first ever urgent National Summit to Combat Antisemitism, with the participation of the Canadian Prime Minister Justin Trudeau, 10 other government ministers, parliamentarians, leaders of civil society, and a diverse expression of the Jewish community. It was the lived testimony of the student participants, and the Jews of Color who embody intersectionality, which proved to be particularly evocative and effective. After their testimony about how they had been targeted, marginalized and excluded in the campus culture â forced to choose between their Jewish identity and acceptance in the progressive space â the prime minister and fellow government ministers responded that the combating of antisemitism domestically and internationally would be a priority on the Canadian agenda.

Accordingly, I shared with summit participants, in my capacity as Special Envoy for Preserving Holocaust Remembrance and Combatting Antisemitism, a proposed 10-point national action plan for combating antisemitism, including:

â¢ the unmasking and exposing of the Durban legacy of hate as a launching pad for demonological antisemitism â the indictment of Israel as a racist, imperialist, colonialist, settler, ethnic cleansing, child-murdering, apartheid, Nazi state â it is this criminal indictment that was born and bred at Durban, and which must be combated today;

â¢ the enhancement of the adoption and implementation of the IHRA Working Definition on Antisemitism;

Let there be no mistake about it: antisemitism is the canary in the mineshaft of global evil, 'toxic to democracies' as Dr. Ahmed Shaheed, the UN Special Rapporteur on Freedom of Religion and Belief put it, and an assault on our common humanity. But Jews alone cannot combat or defeat antisemitism. What is required is a global constituency of conscience to combat it. It mandates a global response, as exemplified by the community of democracies withdrawing from the 20th anniversary Durban conference, lest their presence validate its hateful legacy. The time has come to repudiate that legacy, as part of the larger struggle to combat antisemitism."
Date
September 24, 2021
Title
The Durban legacy of hate, 20 years later, The Times of Israel
Author(s)
Irwin Cotler
Original Source
https://blogs.timesofisrael.com/the-durban-legacy-of-hate-20-years-later/
Attachment
Click here to view this article in MS Word/PDF format