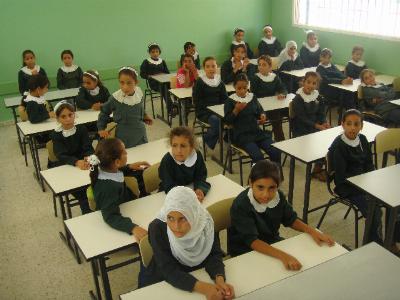 Children in a Palestinian classroom (File photo courtesy Wikimedia Commons)
"Study cards for eleventh graders accusing Jews of being âin control of global events through financial power,â seventh graders instructed to describe Israeli soldiers as âSatanâs aidesâ in a textbook chapter imploring Muslims to âliberateâ the Al-Aqsa Mosque, and children gathered to listen to a poem with the following line: âGive me a Kalashnikov, an [M-] 14, an axe and a knife.â

These are some of the examples of the virulent antisemitism experts say continues to show up in educational materials provided to children living in territory controlled by the Palestinian Authority. The problem has persisted despite years of outrage and international pressure and contributes to prolonging the Israeli-Palestinian conflict, experts and lawmakers told The Algemeiner.

âFor the Palestinian Authority, the strategy is to use the unique authoritative nature of textbooks to create a society, which is essentially violent,â Marcus Sheff, the CEO of Impact-se, an Israeli education watchdog, told The Algemeiner. âIf you look across the Palestinian textbooks from cover to cover, as we have from line to line, there is no Israel. There is a yearning for places located inside of Israel, and there is, if you like, an enthusiasm for violence conveyed in their lauding those who have been violent in the past and in their justifying violence today.â

Educational materials produced by the Palestinian Authority, similar to that issued by Hamas in Gaza, are some of the most antisemitic in the Middle East and North African (MENA) region and reflects Palestinian societiesâ larger hopes for a world without a Jewish State, Sheff added.

âWhat is the strategy of the PA? It is a picture of one state, essentially one Palestine âfrom the river to the seaâ which will be gained by the students through violence,â Sheff continued. âThat is the strategy essentially, and you know, this is well understood by many. This is not normal. It should never be considered normal.â

Exposing Palestinian youth to violent imagery and themes has inspired real-world bloodshed. In May 2022, it was revealed that a 17-year-old who was shot dead after attempting invade an Israeli familyâs home in the West Bank while armed with a knife attended a school that taught students to murder Israelis. The twelfth grader attended A-Zeer Boys High School in the Bethlehem Governorate, which used textbooks promoting âJihad and martyrdomâ and described Jews as âdangerousâ and âperverted in nature.â..."
Date
January 23, 2023
Title
âThis is Not Normalâ: Antisemitism in Palestinian School Curriculum Persists as Problem Despite Global Outrage, Experts Say, The Algemeiner
Author(s)
Dion J. Pierre
Original Source
https://www.algemeiner.com/2023/01/23/this-is-not-normal-antisemitism-in-palestinian-school-curriculum-persists-as-problem-despite-global-outrage-experts-say/
Attachment
Click here to view this article in MS Word/PDF format