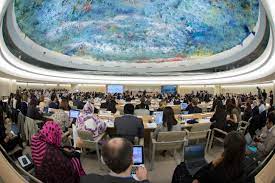 The U.N. Human Rights Council (File photo courtesy Wikimedia Commons)
"The United Nations Human Rights Council in Geneva â declared a âcesspool of political bias against Israel and the USâ by the Trump administration â on Tuesday bashed the Jewish state in a new report.

Navanethem âNaviâ Pillay, the chairwoman of the International Commission of Inquiry(COI) on the Occupied Palestinian Territory, including East Jerusalem and Israel, seemingly admitted to the bias of the report.

âThe findings and recommendations relevant to the underlying root causes were overwhelmingly directed toward Israel,â she said.

The report was slanted against the Jewish state because of the âasymmetrical nature of the conflict of the reality of the State occupying the other,â Pillay added.

The State Department released a statement on the report, Tuesday afternoon, calling it âa one-sided, biased approach that does nothing to advance the prospects for peace. The report of the Commission, released today, does nothing to alleviate our concerns.â

The commission was charged to investigate âall alleged violations of international humanitarian law and all alleged violations and abuses of international human rights law leading up to and since 13 April 2021, and all underlying root causes of recurrent tensions, instability and protraction of conflict, including systematic discrimination and repression based on national, ethnic, racial or religious identity.â

In a series of seven tweets, Israel's Foreign Ministry slammed the report on Tuesday, terming the COI ânothing more than a waste of money and effort of the United Nationsâ systemsâ and âpart and parcel of the witch-hunt being carried out by the Human Rights Council against Israel.â

Anne Bayefsky, the director of the Touro Institute on Human Rights and the Holocaust and president of Human Rights Voices, told Fox News Digital that the commission of inquiry was ârigged from the founding mandate.â

Bayefsky said, âThe chair of the Inquiry, Navi Pillay, spent her time in office [2008-2014] as [UN] high commissioner [for human rights] fixated on slandering Israel with wild, unsustainable accusations from apartheid to blood libels. UN rules demand members of inquiries be objective and impartial. But Pillay and her cohorts were selected by the Human Rights Council precisely because they were not. The council set out to demonize and delegitimize the Jewish state, and they got exactly what they asked for â best described as UN-driven antisemitism.â

A spokesman for the U.N. Human Rights Council directed Fox News Digital to a statement issued by the commission, but would not offer comment on the mounting criticism against the report. He said questions would be answered at a scheduled press conference with the report's authors next week.

Bayefsky noted that âthe inquisition called for submissions and insisted on a focus on victims. We made an historic response: More than five million unique submissions and individual names of Jewish victims of Arab incitement and violence were sent to the UN. The victims of antisemitism spread by Nazi collaborator and Palestinian role model the Grand Mufti of Jerusalem Amin al-Husseini; the Jewish refugees who were victims of Arab persecution in Middle East and North African nations; the victims of Palestinian terrorism over the last seven decades, and so on. We never heard back regarding those submissions.â

Bayefsky said that instead, the inquiry has now released its report that says: ââthe Commission has received several thousand written submissionsâ and features a tiny subset of select Israel-bashing âstakeholders.â Millions of submissions challenging the UN routine of Israel-bashing and anti-Israel bias didnât make the cut in a report that claims to present âan overview of the wide range of violations and abuses at the heart of the conflictâ because the fix was in.â

The Trump administration withdrew from the U.N. Human Rights Council in 2018 because of its discriminatory conduct toward the U.S. and Israel. The Biden administration rejoined the organization in 2021.

Israel rejects the contention that it occupies Judea, Samaria and East Jerusalem. Jerusalem declined to participate in the commission of inquiry.

Then-Prime Minister Benjamin Netanyahu called the Human Rights Councilâs establishment of the commission in May 2021 a âshameful decision.â He accused the council of a âblatant anti-Israel obsession,â noting the âautomatic majority at the council whitewashes a genocidal terrorist organization [Hamas] that deliberately targets Israeli civilians while turning Gazaâs civilians into human shields.â

Watchdog organizations made clear their continued frustration at the U.N.'s bias against the Jewish state.