U.N. on track to violate both Charter and Staff Rules 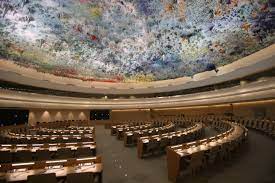 The U.N. Human Rights Council (U.N. Photo)
"In May 2021, the UN Human Rights Council established an âongoing independent, international Commission of Inquiryâ to investigate âall alleged violations of international humanitarian law and all alleged violations and abuses of international human rights law leading up to and since April 13, 2021, in the Occupied Palestinian Territory, including east Jerusalem, and all underlying root causes of recurrent tensions, instability, and protraction of conflict, including systematic discrimination and repression based on national, ethnic, racial or religious identity.â

This clearly biased and one-sided mandate, in and of itself, says much about the hypocrisy and double standards throughout the UN system, and the penchant for singling out Israel. This fixation of the Human Rights Council, as exemplified in the mandate of the Inquiry Commission, is not new, and is repeated annually, having sadly become accepted UN practice.

Such questionable practice is totally irreconcilable with one of the basic purposes of the UN itself, as set out in the opening article of its charter, of âharmonizing the actions of nations,â as well as the âprinciple of sovereign equality,â so essential to the functioning of the organization.

In addition to this violation of the UNâs founding principles, the appointment and functioning of the three members of the Inquiry Commission â former UN human rights high commissioner Navi Pillay as chair, and human rights âexpertsâ Miloon Kothari (India) and Chris Sidoti (Australia) â reeks of bias, lack of objectivity and acute partiality.

These commission members have never concealed their negative predilections against Israel. On the contrary, they are openly on record promoting harsh and libelous accusations against Israel, and even antisemitic slurs and tropes.

The appointment and continued functioning of these people violates both the UN Charter itself, as well as the official UN Staff Rules and Regulations that implement the charter provisions and regulate the administration and performance of UN staff members and officials.

Appointing these people to a UN Inquiry Commission contravenes articles 100 and 101 of the UN Charter requiring officials to exercise âhighest standards of efficiency, competence and integrityâ and to ârefrain from actions that might reflect on their position as international officials.â

It also contravenes those provisions of the official UN Staff Rules and Regulations which require that political and religious views and convictions of UN officials and staff do not adversely affect their official duties or the interests of the UN.

These rules prohibit engaging in activity that is incompatible with the proper discharge of their duties, including the requirement to âavoid actions and public pronouncements that may adversely reflect on their status, or on the integrity, independence and impartiality that are required by that statusâ (Staff Regulations 1.1 and 1.2).

The appointment and activity of these commission members also contravene internationally accepted Codes of Conduct and Standards of ethical behavior and professional conduct applicable to the Human Rights Council. These all require that UN officials conduct themselves with the highest standards of objectivity, fairness, impartiality, transparency, moral authority, integrity, honesty, good faith and credibility, as well as avoidance of double standards and politicization.

Violation of the charter

IT IS inconceivable that the UN permits the continued functioning of the Inquiry Commission, in light of the inherent incompatibility of the commissionâs mandate with, and violation of the purposes and principles of the UN as set out in its charter.

By the same token, its continued functioning violates those provisions of the UN Charter and UN official Staff Rules and Regulations prohibiting the acute and public bias and double standards voiced by all members of the commission.

Serious consideration should be given to terminating the functioning and financing of this ill-advised and damaging Inquiry Commission."
Date
August 9, 2022
Title
U.N. on track to violate both Charter and Staff Rules, The Jerusalem Post
Author(s)
Alan Baker
Original Source
https://www.jpost.com/opinion/article-714304
Attachment
Click here to view this article in MS Word/PDF format