U.N. rights officials mum on Hamas use of captive Israeli civilian for propaganda 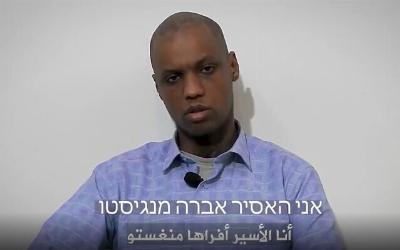 The UNHRC and its special rapporteur tasked with investigating the conflict, Francesca Albanese, do not respond to Times of Israel requests for comment on the incident. The special rapporteur, who has a history of antisemitism, has publicly commented on Israeli evictions since the Hamas video was released.

UN officials regularly criticize Israel for its actions against Palestinians. Israel and the US accuse the world body in New York, and the UNHRC in Geneva, of bias against the Jewish state.

Mengistu has been held in Gaza for eight years after he entered the Strip of his own volition. His family says he suffers from mental health issues..."
Date
January 17, 2023
Title
U.N. rights officials mum on Hamas use of captive Israeli civilian for propaganda, The Times of Israel
Author(s)
Luke Tress
Original Source
https://www.timesofisrael.com/liveblog_entry/un-rights-officials-mum-on-hamas-use-of-captive-israeli-civilian-for-propaganda/
Attachment
Click here to view this article in MS Word/PDF format