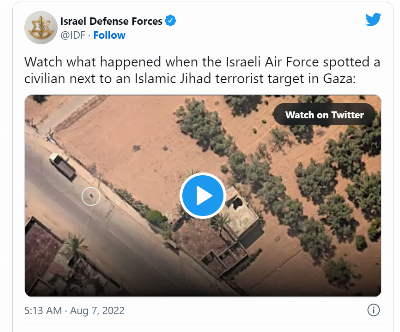 The military issued a video depicting the repeated decisions to delay the key operation.

âChildren were identified in the area so the attack was delayed several times,â a statement issued by the Israeli military read. âLater, when the kids were no longer in the area, the attack was successfully carried out.â

The video and statement were released as part of the militaryâs bid to show its efforts to avoid harming civilians, even when confronted with the opportunity to hit a top-tier target..."
Date
August 7, 2022
Title
Video shows IDF delaying strike on PIJ commander due to kids playing nearby, The Times of Israel
Original Source
https://www.timesofisrael.com/video-shows-idf-delaying-strike-on-pij-commander-due-to-kids-playing-nearby/
Attachment
Click here to view this article in MS Word/PDF format