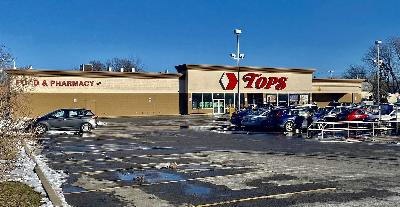 The Tops Supermarket (Photo courtesy Wikimedia Commons)
"The man charged with killing 10 people at a Buffalo, New York, supermarket Saturday allegedly was motivated by a conspiracy theory that has spurred recent deadly attacks on Jews, among others.

An online manifesto attributed to Payton Gendron, 18, explains that the attack was spurred by the theory that a tide of immigrants is crowding out white populations in western countries. The manifesto also says that Jews are the real problem but that âthey can be dealt with in time.â

The Tops supermarket, located just a few miles from the Canadian border, was chosen because it is in an area with many Black residents, the manifesto says. Eleven of the 13 people shot there were Black, local law enforcement officials said.

Law enforcement authorities are working to verify that the manifesto was written by Gendron, who was arrested at the scene and later charged with first-degree murder. The U.S. Justice Department is investigating the shooting as âa hate crime and an act of racially motivated violent extremism,â Attorney General Merrick Garland said in a statement.

The baseless theory outlined in the manifesto is known as âGreat Replacementâ and has united white supremacists across borders in their hatred of Jews and immigrants. Replacement theory has inspired multiple antisemitic and extremist attacks, including the 2018 Pittsburgh synagogue shooting in which 11 Jews were murdered; the 2019 attack on a New Zealand mosque that killed 51; and the 2019 massacre at a Texas Wal-Mart that targeted Hispanic immigrants.

Structured largely in a question-and-answer format and accompanied by collected memes and internet citations, the manifesto explicitly states that the author is driven by hatred of Jews.

The author says he departs from many white supremacists in concluding that Jews are, for the most part, white. But, citing pages of quotations from the Talmud, he says Jews are polluted by learning that âthey are Godâs chosen people and they are permitted to hate and exploit the goyimâ or non-Jews, and to engage in pedophilia. (Purported fear of pedophilia is also central to QAnon, another conspiracy theory with antisemitic roots that has gained widespread currency on the American right.)

âAre you an anti-semite? YES!!â the manifesto reads in one place.

Later, the author answers the question, âWhy attack immigrants when the Jews are the issue?â The answer reads, in part: âThey can be dealt with in time.â..."
Date
May 15, 2022
Title
What you need to know about the antisemitic ideology behind the Buffalo shooting, JTA.org
Author(s)
Philissa Cramer and Ron Kampeas
Original Source
https://www.jta.org/2022/05/15/united-states/avowed-antisemite-and-white-supremacist-kills-10-in-buffalo-n-y-supermarket-shooting
Attachment
Click here to view this article in MS Word/PDF format