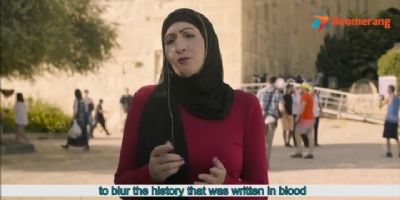 Screenshot of Sarah Zoabi
"An Israeli Muslim Zionist activist took UNESCO to task on Wednesday over its move last week to designate the Cave of the Patriarchs in Hebron as an endangered Palestinian World Heritage site.

In a video published on Facebook, Sarah Zoabi - from the northern Israeli city of Nazareth - said, 'All of the UN's various attempts to blur the history that was written in blood will not succeed in erasing the right and the religious and historical connection between the People of Israel and this Land. Hebron is the City of the Patriarchs and Matriarchs of the Jewish people.'

'Why does the UN interfere only here?,' she asked. 'Where are all the countries that need help in the Middle East and other places?'"
Date
July 12, 2017
Title
Israeli Muslim Zionist Activist Castigates UNESCO Over Hebron Vote, The Algemeiner
Original Source
https://www.algemeiner.com/2017/07/12/israeli-muslim-zionist-activist-castigates-unesco-over-hebron-vote/
Attachment
Click here to view this article in MS Word/PDF format