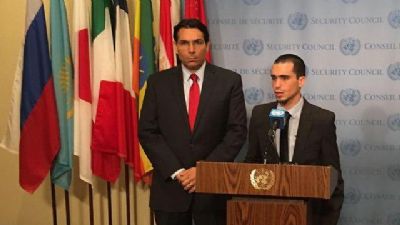 Oren Almog and Israeli representative to the UN Danny Danon, July 25, 2017
"Oren Almog, who lost five members of his family along with his eyesight in a terrorist attack at the Maxim restaurant in Haifa in 2003, called on the UN Security Council on Tuesday to work to stop the Palestinian Authority's payments to convicted terrorists.

'In a few minutes, the UN Security Council is about to hold a discussion on the Middle East. But one of the most important subjects, will remain outside this discussion: Funding of terrorism by the Palestinian authority,' said Almog.

'Yes, the same Palestinian leadership, which talks with international leaders about its desire for peace, is actually paying salaries to terrorists and their families, every single month. Salaries that rise relating to the number of victims-those who kill more, get more,' he explained.

'I think anyone who believes in the value of human life should act. Therefore, I am calling all the countries, whose representatives are here in this building: help, and if necessary, force President Abbas to make the right decision,' Almog went on to say."
Date
July 25, 2017
Title
Israeli blinded in terror attack urges UNSC to stop PA’s terrorist stipends, YNet News
Author(s)
Itamar Eichner
Original Source
http://www.ynetnews.com/articles/0,7340,L-4994223,00.html
Attachment
Click here to view this article in MS Word/PDF format