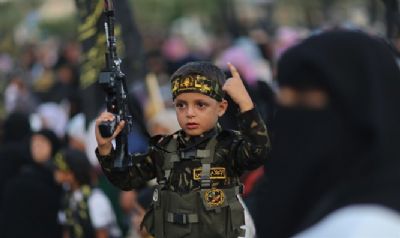 "The number of terrorist attacks on Israelis by Arab children has greatly increased since the beginning of the so-called 'stabbing intifada' in September 2015, according to a new report by a human rights NGO.

The report by UN watchdog Human Rights Voices (HVR) states that 'there have been at least 79 separate terrorist attacks by Palestinian children since September 13, 2015.'

The attackers have been as young as eight.

The report further noted that rather than act to prevent children from risking their lives in order to kill Jews, the Palestinian Authority has incited and encouraged its children to commit murder, in violation of international law.

The report quotes PA UN representative Riyad Mansour's declaration in the public hall of the UN Headquarters on November 23, 2015 as evidence of the PA's endorsement of child terrorism: 'We are so proud that in this popular uprising that has started almost two months ago, that the backbone of this uprising are the youth of Palestine.'