U.N. plants the seeds of terrorism 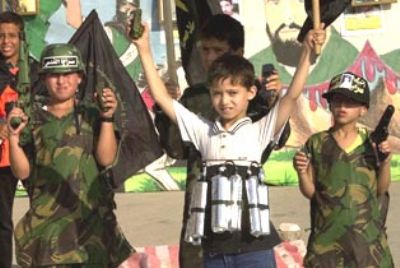 A Palestinian child pretending to be a suicide bomber
"Despite video, photo and social-media evidence of Palestinian children, some as young as 8, engaging in terrorist acts against Israeli citizens, the United Nations turns a blind eye to the bloodshed, according to a human rights group.

The secretary-general's 2017 annual report released earlier this year maintains there's 'limited information ... about the recruitment or use of children,' The Washington Free Beacon reports.

Yet in the aftermath of attacks in the fall of 2015 that left two Israelis dead and nine injured, the Palestinian U.N. representative declared at the U.N.'s headquarters, 'We are so proud that in this popular uprising that has started almost two months ago, that the backbone of this uprising are the youth of Palestine,' according to the group Human Rights Voices.

This month the Senate Foreign Relations Committee advanced legislation, the Taylor Force Act, which would cut U.S. funding to the Palestinian Authority unless it stops its 'pay to slay' policy. Reportedly advanced by Palestinian President Mahmoud Abbas, the policy distributes millions of dollars in monthly payments to terrorists and their families. The legislation is named after an American killed by a Palestinian terrorist in Israel last year.

Yet in a world body where all manner of terrorism should be resoundingly denounced, there is reticence to address its very roots. And a potential pathway to peace in the West Bank and Gaza Strip is rendered inaccessible by the culture that permeates Turtle Bay."
Date
August 20, 2017
Title
U.N. Watch: Seeds of terrorism, Tribune-Review
Original Source
http://triblive.com/opinion/editorials/12606884-74/un-watch-seeds-of-terrorism
Attachment
Click here to view this article in MS Word/PDF format