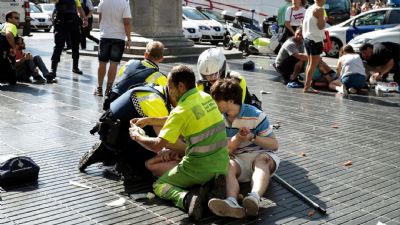 Victims being treated after the Barcelona terror attack, August 17, 2017
"The vehicular terror attack in Barcelona follows a similar wave of car ramming attacks in Nice, London, Paris, Berlin, and Stockholm over the past year, which have claimed a combined total of 130 lives.

But the sober reality is that this wave of vehicular terror we are seeing across Europe now was pioneered by Palestinian terrorists in Israel, when the world mostly looked the other way, trying to downplay, excuse or just plain ignore the attacks, seeking to differentiate terror in Israel from terror in Europe. Today, Islamic jihadists are copying and exporting this murderous methodology across Europe.

So, what can be done about this, and specifically, how can Europe stop this wave of car rammings by 'lone wolves' and what can it learn from Israel?

First and foremost, European leaders must diagnose the problem and identify their enemy. You cannot win a war unless you know who you are trying to defeat. It is not just plain 'extremism', some generic form of 'terrorism' or a mass outbreak of undiagnosed patients suffering 'mental health'. The enemy has a name and that name is radical Islam.

The European Union appears to have no problem labeling Israeli pickles and tomatoes produced in the West Bank, yet many still seem reluctant to call out Islamic terrorists by their name and label radical Islam as the root of this wave of terror sweeping the continent...

Preventing 'lone wolf' attacks 100% of the time is simply not feasible, but greater steps can be taken to minimise the threat.

This will require bold leadership and a recognition that whether it is Barcelona, Nice, London, Berlin, Stockholm or Jerusalem, terror is terror and the West must stand united, in unwavering solidarity and commitment if we are to defeat this global evil."
Date
August 21, 2017
Title
What Europe can learn from Israel in its war against vehicle attacks and lone wolf terror, The International Business Times
Author(s)
Richard Kemp, Arsen Ostrovsky
Original Source
http://www.ibtimes.co.uk/what-europe-can-learn-israel-its-war-against-vehicle-attacks-lone-wolf-terror-1635945
Attachment
Click here to view this article in MS Word/PDF format