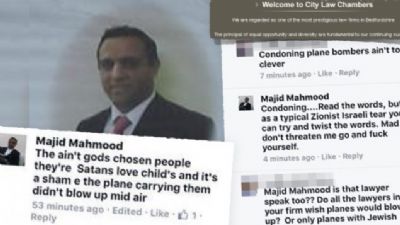 Majid-Mahmood with some of his Facebook comments (Campaign Against Antisemitism)
A British attorney who called for the bombing of a plane carrying Jewish refugees has been suspended from practicing law for 12 months and ordered to pay Â£35,000 by the Solicitors Disciplinary Tribunal. Majid Mahmood, a partner at the law firm City Law Chambers, posted on his personal Facebook page in October 2015: "Somebody needs to shoot all the Israeli Zionists dead then send their bodies to America as a present for Obama and his Zionist pals." In February 2016, Mahmood commented on a Facebook page called 'Israel is a war criminal' regarding an article about Jewish refugees being flown to Israel: "The ain't gods chosen people they're Satans love child's and it's a sham e the plane carrying them didn't blow up mid air." (All errors in the original).

After a complaint was filed at the Solicitors Disciplinary Tribunal, Mahmood argued that his posts were offensive, but not antisemitic. The Tribunal found that the October 2015 post "stepped over the line by advocating violence" and "demonstrated a clear lack of integrity" but was not antisemitic because it was directed against "Israeli Zionists" and not Jews as a whole. The Tribunal found that the February 2016 post was "wholly indefensible," "went far beyond exercising his right to freedom of speech," was "unforgiveable," and was "proved beyond reasonable doubt" to be antisemitic.

Although the tribunal suspended Mahmood from practicing law for 12 months, the suspension was itself suspended for 12 months.
Date
August 15, 2017
Title
Judgment by the Solicitors Disciplinary Tribunal against Majid Mahmood, Solicitors Disciplinary Tribunal
Original Source
http://www.solicitorstribunal.org.uk/sites/default/files-sdt/11625.2017.Mahmood.pdf
Attachment
Click here to view this article in MS Word/PDF format