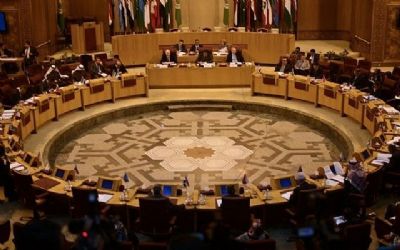 Arab League headquarters, Cairo
"The Arab League on Sunday agreed to a request from the Palestinian Authority to form a committee aimed at stymieing Israel's bid to becoming a member of the United Nations Security Council, a Palestinian official said.

Israel has said it will vie for a seat on the 15-member panel for 2019-2020, the first time the Jewish state has tried to win a spot on the UN's most powerful forum.

Palestinian ambassador to Cairo Jamal al-Shobaki, who is also the representative for the PA in the Arab League, said that five Arab bodies would work together to foil Israel's bid, according to the PA's official new site Wafa.

Israel has been publicly eyeing a seat on the important world body since at least 2013.

Jerusalem is planning to apply for one of two spots allocated to the Western European and Other Group (WEOG), to which it was admitted in 2000...

A key battle will be in Africa, where Israel has been deepening its ties in recent years. Prime Minister Benjamin Netanyahu has visited Africa twice over the last year, making strengthening ties with the continent one of his main foreign policy goals. Besides seeking new markets for Israeli agriculture, hi-tech and security know-how, the prime minister was also keen to improve African nations' voting record on Israel-related matters in international forums, such as the UNSC or the United Nations Educational, Scientific and Cultural Organization (UNESCO)...

Togo, which is a member of the Organization of Islamic Cooperation (OIC), is organizing an Africa-Israel summit, which is scheduled for October 23-27 in the capital Lome. Togo is set to invite all 54 countries on the continent to the event, but the Palestinians, Morocco and South Africa are actively seeking to derail the gathering.

Shobaki said on Sunday that there is a draft resolution submitted to the Arab League Council both by the Palestinians and Saudi Arabia 'in connection'to this planned summit..."
Date
September 10, 2017
Title
Arab League forms committee to foil Israeli bid for UNSC membership, The Times of Israel
Author(s)
Dov Lieber
Original Source
https://www.timesofisrael.com/arab-league-forms-committee-to-foil-israeli-bid-for-unsc-membership/
Attachment
Click here to view this article in MS Word/PDF format