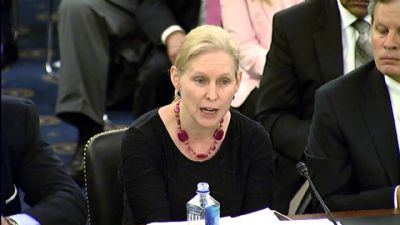 U.S. Senator Kirsten Gillibrand, who withdrew her co-sponsorship of the Israel Anti-Boycott Act in August (File photo)
At least two Democratic legislators have withdrawn their support for a bill aimed at countering a UN-led discriminatory boycott effort against Israel. Illinois Rep. Bobby Rush withdrew his co-sponsorship of the House version on September 5, 2017 from the "Israel Anti-Boycott Act". New York Senator Kirsten Gillibrand withdrew her co-sponsorship from the Senate version in August.

The Anti-Boycott Act was introduced by Republican Senator Rob Portman (Ohio) March 23, 2017 in response to the UN Human Rights Council's adoption of a resolution that mounts a Boycott, Divestment, and Sanctions (BDS) campaign against Israel. The resolution has spawned the creation of a blacklist - euphemistically entitled by the UN a "database" - of companies directly or indirectly doing business in Arab-claimed territory. Rather than negotiate with Israel - and thus recognize the legitimacy of a Jewish state - over final ownership of territory, the UN resolution and its Palestinian sponsors aim to strangle Israel economically.

The Anti-Boycott Act would prohibit U.S. entities from participating in boycotts or requests for boycotts imposed by international governmental organizations, including the UN, against Israel.