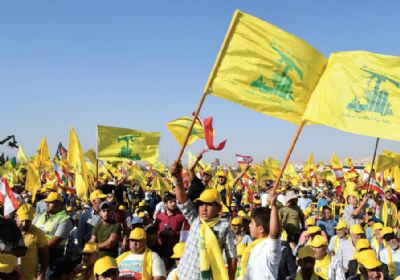 Supporters of Hezbollah
"Two years after the nuclear deal was signed by Iran and world powers, the Islamic Republic is reported to have boosted its financial support to Hezbollah to $800 million a year, a dramatic increase from the $200m. it was said to be giving its proxy when sanctions were in place.

Hezbollah, one of the most prominent terrorist organizations in the world, has become bogged down fighting in Syria for Bashar Assad. Of its approximately 22,000 fighters, about 7,000 are fighting for the Assad regime, and some 2,000 have been killed in the four years the group has spent in Syria.

The US and European countries lifted sanctions against Iran in January 2016, releasing roughly $100 billion in assets after international inspectors found that Iran had dismantled large parts of its nuclear program. According to US media, officials say President Donald Trump is ready to extend those waivers that were issued under the Obama administration..."
Date
September 15, 2017
Title
Iran pays $830 million to Hezbollah, The Jerusalem Post
Author(s)
Anna Ahronheim
Original Source
http://www.jpost.com/Middle-East/Iran-News/Iran-pays-830-million-to-Hezbollah-505166
Attachment
Click here to view this article in MS Word/PDF format