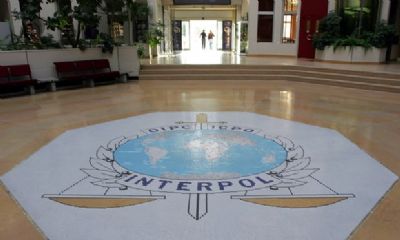 Interpol Headquarters
"In a stinging diplomatic defeat for Israel, the world's largest international police organization on Wednesday accepted the 'State of Palestine' as a full member.

At Interpol's annual General Assembly in Beijing, the Palestinians' membership bid was accepted with 75 counties voting yes, 24 voting no, and 34 abstaining.

Israel fiercely objected to the Palestinians joining Interpol, arguing that Ramallah's alleged support for terrorism could hinder rather than aid Interpol's efforts. The US administration, too, objected to Ramallah's membership bid and helped Israel lobby against it...

Wednesday's Interpol vote can be seen as a bitter defeat for Israel's diplomatic efforts. Since Palestine was admitted to Interpol in a secret ballot, Israeli officials cannot argue in this case that the world's nations secretly support the Jewish state even if they are still unwilling to openly side with it.

Last year, Israel successfully prevented the Palestinians from joining Interpol, with 62 members of the Executive Committee voting to postpone the request. The PA's first request in 2015 was rejected by Interpol on the grounds that it was submitted too late for discussion by that year's assembly.