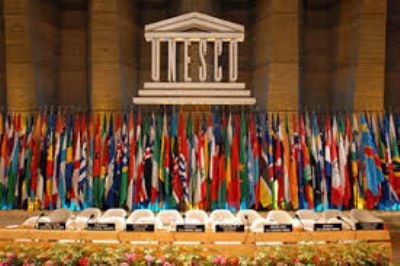 UNESCO Headquarters
"The United Arab Emirates snubbed Israel again on Monday, when its diplomats handed out gifts to all delegations at the UN cultural agency except Israel.

The incident came on the heels of UAE's refusal last week to allow Israeli athletes to display the Israeli flag and play the national anthem at a judo tournament in Abu Dhabi. An Emirati judoka also refused to shake hands after losing to his Israeli competitor, although the country's top judo official later apologized to his Israeli counterpart for the snub.

At Monday's opening of UNESCO's 39th General Conference in Paris, the Emirati delegation placed a box containing a silver medal on the desk of each foreign delegation in honor of the UAE having sponsored the renovation of the conference hall. The medals bear a portrait of Hamdan bin Rashid Al Maktoum, the deputy ruler of Dubai and finance minister of the UAE, who sponsored the renovations.

No box, however, was placed on the desk of Israel's ambassador to UNESCO, Carmel Shama-Hacohen.

'The State of Israel has no need for gifts, but this ugly and uncivilized step, here in the world's organization for culture and education, which follows the outrageous treatment of our judokas during the tournament in the UAE's capital, shows how much hatred, incitement and dark mentality surround these people,' Shama-Hacohen said...