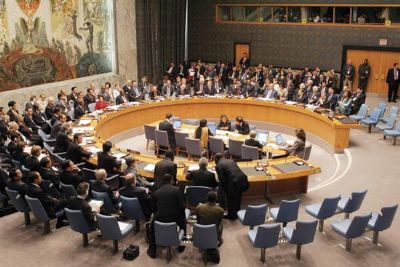 The Security Council
"A day after 14 countries on the Security Council voted in favor of a resolution against Washington's decision to recognize Jerusalem as Israel's capital, Israel was focused more on trying to stop further Palestinian moves in international forums than punishing the countries who voted for the measure.

As a result, foreign ambassadors were not summoned on Tuesday by the Foreign Ministry for a reprimand, nor were Israeli ambassadors recalled from any of the 14 countries who voted at the UN Security Council for the resolution.

Despite the support of 14 of the 15 Security Council countries, that resolution failed because the US cast its veto.

This was a marked change from a year ago, when Jerusalem reacted furiously following the passage of Security Council Resolution 2334 that called on Israel to 'immediately and completely cease all settlement activities in the occupied Palestinian territory, including east Jerusalem.'...

While Jerusalem waged a furious diplomatic campaign ahead of the 2016 vote to try and upend that resolution, this time there was little diplomatic effort to get countries to oppose the Jerusalem resolution, knowing that the US would block it.

'Since we knew the US would veto the resolution, we didn't want to waste our ammunition,' one official said.

Likewise, Israel has not taken any punitive measures or protested those countries sitting on the Security Council that voted for the measure...

Rather than focusing on Monday's vote, the Foreign Ministry is bracing for â and instructing its delegations abroad to try to fend off â Palestinian efforts to take the measure that the US vetoed to the General Assembly, where it would be certain to pass.

The ministry is also planning to push back against Palestinian efforts to gain entrance into other international organizations, as the PLO successfully did with UNESCO in 2011 and Interpol earlier this year..."
Date
December 19, 2017
Title
Israel looks to fend off further PA moves in international arena, The Jerusalem Post
Author(s)
Herb Keinon
Original Source
http://www.jpost.com/Arab-Israeli-Conflict/Israel-looks-to-fend-off-further-PA-moves-in-international-arena-518506
Attachment
Click here to view this article in MS Word/PDF format