How the Trump Administration Can Hold the U.N. Accountable Again 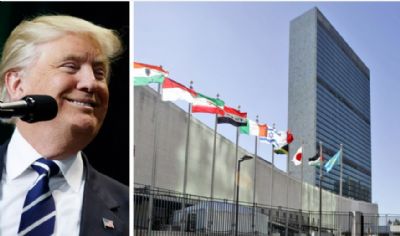 President Donald Trump (left) and the United Nations Headquarters
"Although the extreme anti-Israel and anti-U.S. bias in the U.N. of the Cold War days is long over, the organization is still working against American interests, a situation made worse by the naÃ¯ve U.N. policies of the Clinton and Obama administrations and the general neglect of the U.N. by the George W. Bush administration...

Ambassador Haley is already working to cut U.N. spending, and she announced last week that she has negotiated a $285 million reduction in the U.N.'s 2018 budget. Although this was a good start, next year's U.N. budget will be about $5.2 billion, so Haley must work to extract much larger cuts.

Holding U.N. members and the U.N. bureaucracy accountable for their votes and actions must be part of the Trump U.N. policy. While Trump officials have already said they may deny aid to states that vote against the United States, there are many similar steps they should take to punish the U.N. and its members for actions that violate the principles of liberty and freedom on which the organization was founded...

President Trump must make clear that the United States will no longer tolerate U.N. votes and actions that violate our principles of freedom and democracy and will take retaliatory steps in response when necessary.

The Trump administration also should turn the tables on anti-U.S. and anti-Israel bias in the U.N. by aggressively using the Security Council against rogue states like North Korea and Iran. The administration already has been successful in doing this against North Korea by winning unanimous approval of several resolutions imposing the stiffest sanctions ever in response to its nuclear weapons and missile program. Growing concern by European states about the Iranian missile program could lead to similar resolutions against Iran over the next few years.

At the same time, Trump officials need to realize that since the U.N.'s globalist diplomats and bureaucrats will never agree to most of America's demands, they need to focus on those that are doable. A priority should be ensuring that America's allies stand with it in the U.N. as a united bloc for freedom and international security. Based on the shameful decision by the United Kingdom, France, Germany, Italy, Japan, South Korea and many other U.S. allies to vote for last week's UNGA resolution on President Trump's decision to move the U.S. embassy to Jerusalem, it is clear that Ambassador Haley has her work cut out for her."
Date
December 30, 2017
Title
How the Trump Administration Can Hold the U.N. Accountable Again, National Review
Author(s)
Fred Fleitz
Original Source
http://www.nationalreview.com/article/455019/donald-trump-nikki-haley-un-reformers
Attachment
Click here to view this article in MS Word/PDF format